Chronic kidney disease (C.K.D.) is a big challenge to the medical fraternity. About 9.1 % of world population is suffering from CKD.[1] Kidney disorders are the 12th leading cause of death worldwide with an annual death rate of 15.7 per 100000. In India, it is the 8th leading cause of death.[2] Currently, over 2 million people worldwide need dialysis or a kidney transplant for life. However, this number represents only 10% of the people who need these kinds of treatments to save their life. The majority of these patients belong to countries like United States, Japan, Germany, Brazil and Italy. In about 100 developing countries making 50% of world population, only 20% of patients receive these facilities.[3] So, the accessibility and affordability of advanced conventional treatment facilities like dialysis and kidney transplantation are very poor especially in developing countries. Therefore, the need of systems like Ayurveda is high on rise.

Ayurveda treatment can provide relief in a patient of chronic kidney disease in either of the following three ways :

Chronic kidney disease (CKD) can be termed as “Jeerna or Pravruddha Vrikkadosha” in Sanskrit language. A disease condition with similar clinical features is described in Charak Samhita in Chhardi Chikitsa. [Cha. Sa. Chikitsa Sthana 20/16-17] It is a fatal condition. When the morbid vata occludes the channels carrying faeces, sweat, urine and body fluids and moves upwards, then the morbid matter from the koshtha (gastrointestinal tract), gets incited to cause vomiting. It has the following characteristics:

Concepts of kidney and formation of urine

There are no direct references in Ayurvedic classics regarding the role of kidneys in the process of formation of urine. The word pakwashaya (colon) is mentioned as the site of formation of urine. It should not be considered in anatomical or physiological aspects of conventional medicine. Ayurvedic texts emphasize more on therapeutic relevance of the organs. The description may not always match with modern views. This concept has a very good therapeutic utility. The drugs and therapies having action on colon (pakwashaya) are successfully used for promoting proper formation of urine from its original site (kidney).

Word vrikka is found in Rigveda but not as an organ but as a medicinal plant. According to Bhashya the word vrikka means ‘averter of diseases’. Thus, in similar manner we may understand the vrikka as organ also. [Rigveda 1/187/10]

Similarly, the word “vrukka” used for denoting kidneys indicate that it has the capacity of healing itself. This self-healing power of vrukka (kidney) shall be explored and promoted by Ayurvedic treatment.

By definition, chronic renal failure (C.R.F.) is an irreversible deterioration in the renal function, classically develops over a period of years with a decline in glomerular filtration rate (GFR) below 60 ml/min/1.73 m2 of body surface area for more than 3 months. However, clinically, the deterioration in renal function is found to be reversible to some extent. It is certainly not a completely curable disease. When the GFR becomes <15 ml/min/1.73 m2 of body surface area, it is known as end stage renal disease (ESRD).

When any pathological changes occur in kidney, initially there is hyperfiltration leading to minor damages to the kidney. Because of this hyperfiltration, there is over burden to the remaining healthy nephrons to compensate it. This causes further damage in the healthy nephrons and progressive dysfunction ultimately leading to ESRD. Initially it will be evidenced by biochemical abnormalities, but gradually it leads to excretory, metabolic and endocrinal deficiencies related to the functions of kidney.

Etiopathogenesis as per Ayurveda

The etiological factors can be understood and categorized in the following manner.

In this condition, there is involvement of all the three dosha with predominance of vata and kapha dosha. The bodily components that get vitiated in initial stage are urine (mutra), body fluids (rasa, udaka, sweda, rakta) and blood vessels (sira). In later stages all the tissue components (dhatu and upadhatu) may get involved. Clinical conditions related to tendons (snayu), muscles tissue (mamsa), bones (asthi) and reproductive components (shukra) are often observed related to kidney diseases.

The pathological changes happening in the channels of urine(mutravahasrotas) in patients of chronic kidney diseases can be interpreted in terms of guna (inherent qualities). Excessive increase in characteristics like roughness (kharatwa), heaviness (gaurava), hardness (kathinya) and dryness (raukshya) leads to the structural damages in advanced stage.

The functions of agni are deteriorated at every level. Accumulation of intermediate products formed during digestion and metabolism (ama) is seen in every stage. The origin of all these pathological changes is colon (pakwashaya). The disease with initial involvement of middle pathway (madhyamarogamarga) progress to all the three disease pathways (rogamarga). This leads to poor prognosis.

I. Avoiding the cause (nidanaparivarjana)

With the advice for avoiding the causative factors like dietary, life style modifications etc. the underlying disease conditions should be addressed first.

In cases of polycystic kidneys, manage the condition with suitable medicines like Kanchanara guggulu, Varunadi kwatha etc. For example, in case of hypertension, use of antihypertensive drugs to control blood pressure and overload on kidneys. In case of diabetic nephropathy, treatment for diabetes should be done first.

II. Repairing the damage at kidneys (origin of disease)

In order to support the excretory functions and maintenance of fluid and electrolyte balance, the therapeutic procedure called ‘basti’ is found highly effective. The decoction enema (niruha basti) with punarnavadi kwatha, and unctuous enema (anuvasana basti) with gokshuradi taila, the drug Boerrhavia diffusa (punarnava) in a palatable and convenient form 3-5 g twice a day is advisable.

Fluid intake should be regulated according to urine output. Excessive fluid intake is not advisable as it causes extra burden to the nephrons. However dehydration by restriction of fluids shall be prevented.

For correction of anaemia, Chyavanaprasha or any iron containing preparations are effective. Role of erythropoietin shall be considered here. If only the excretory function of kidney is impaired and endocrinal functions are proper, then erythropoietin supplementation is not needed. In case of deficiency of erythropoietin only, it should be supplemented. Fruits of prickly pear, beetroot are natural supplements having similar action to erythropoietin. These are used for promoting blood tissue (rakta dhatu).

For managing myopathy and neuropathy, a very effective therapeutic measure is massage (abhyanga) with medicated oils. This pacifies aggravated vata dosha. For osteodystrophy, Shankhabhasma, compounds of mukta (pearl) and pravala (coral) are used. They are good natural source of calcium and also help in managing hyperacidity. Mukta is an antidepressant too.

In cases of hypertension, Triphala guggulu 1gm three times a day along with powder of Terminalia arjuna (3g) is effective. The powder of Rauwolfia serpentina (sarpagandha) 500mg-1gm can also be given to control hypertension. Symptomatic treatments are given in cases of nausea, vomiting, hiccup etc.

Proper counselling of the patients, giving positive outlook and assurance comes under sattvavajaya chikitsa. This has a great role in such conditions.

In mild cases (creatinine <3mg%), mild therapeutic purgation (virechana) is advised after oleation (snehana) with gokshuradi ghrita. Then medicated enema (basti) with punarnavadi kwatha and gokshuradi taila is given.

If auto immune factors are involved, use of Piper longum (pippali) in the specific ascending and descending doses (vardhamana pippali) is recommended before virechana procedure.

Following medications are found effective in the management of kidney diseases.

An extra 100 ml of boiled milk (cow’s) is also advisable during day time, if the patient feels hungry.

Food items to be avoided: 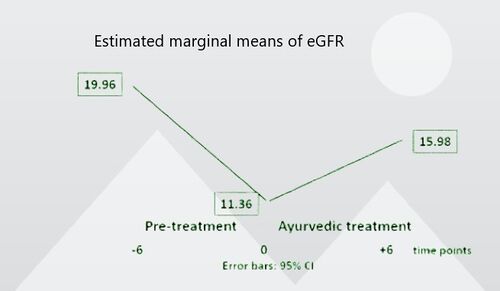 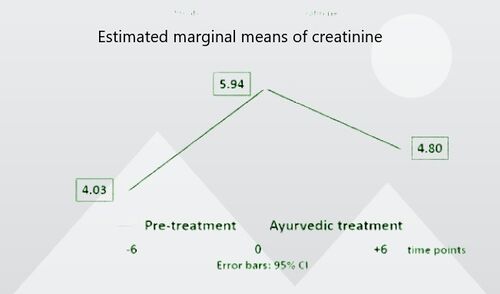 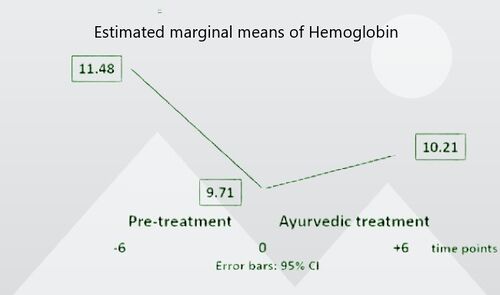 A clinical study of 100 patients of chronic renal failure (other than diabetic nephropathy) to study effect of ayurveda therapy was conducted. Decoction enema (niruha basti) with punarnavadi kwatha daily and oral administration of gokshuradi guggulu, rasayana churna and varunadi kwatha as per the protocol were prescribed for a period of one month. In this study, statistically significant results were obtained in levels of serum creatinine, blood urea and albumin in urine along with considerable relief in signs and symptoms.[6]

Another study was conducted in 130 patients of diabetic nephropathy treated with oral administration of gokshuradi guggulu, bhumyamalaki, vasa and shilajatvadivati for 2 months. The data showed highly significant reduction in serum creatinine, blood urea and urinary excretion of albumin.[7]

In a study, sixty-four non-dialysis CRF patients with stage IV or V at base line and having record of laboratory investigations of the preceding 6 months were studied. The treatment protocol included enemas (niruha-basti) containing 40 ml punarnavadi kwatha daily one hour before lunch for one month. Oral medications like gokshuradi guggulu, varunadi kwatha, rasayana churna, bhumyamalaki, shilajatwadivati, and chyavanaprasha were given for six months. Renal function tests (RFTs) were evaluated at various time points, i.e 6 months before baseline (TP -6), at baseline (TP 0), and after completion of 6 months of treatment (TP +6). After six months of Ayurvedic treatment, statistically and clinically significant improvements of eGFR, serum creatinine, blood urea, and hemoglobin and a significant shift to better CRF stages were observed in this study.[8]

Clinical Studies on effect of Ayurvedic treatment on dialysis dependent patients are under progress.

Back to the Top
Retrieved from "https://www.carakasamhitaonline.com/mediawiki-1.32.1/index.php?title=Kidney_diseases&oldid=41362"