Agni is a responsible factor for digestion, transformation, and metabolism in the body. The term ‘dhatvagni’ means the fraction of agni that functions at various body components (dhatu) for nourishment and metabolism. It is responsible for the metabolic transformation of food consumed and its assimilation. Agni is the supreme physiological authority in the human body[1] and is of 13 types. Jatharagni is for digestion, five bhootagni for metabolism of panchamahabhuta components, and seven dhatvagni for metabolism of dhatu or tissues.[Chakrapani on Cha.Sa.Chikitsa Sthana 15]

The dhatvagni assimilates and synthesizes the dhatu or tissues of the human body. It is located in the respective srotas of the particular dhatu.[2] Dhatvagni is responsible for the transformation of one dhatu into another.[3] This article describes the concept and applications of dhatvagni in medical sciences.

The management of diseases depends on correction of agni and restoration of well-formed dhatu. [Chakrapani on Cha.Sa.Sutra Sthana 30/28]. The dhatvagni is classified into seven types as below:

Dhatus are the structural and functional units that act as dosha and mala seats. The functioning of dhatvagni (dhatvagnipaaka) includes overall nourishment and development of the body structures. Dhatvagnipaaka refers to the sequential changes undergone by the essence of food through the medium of seven dhatvagni entities. 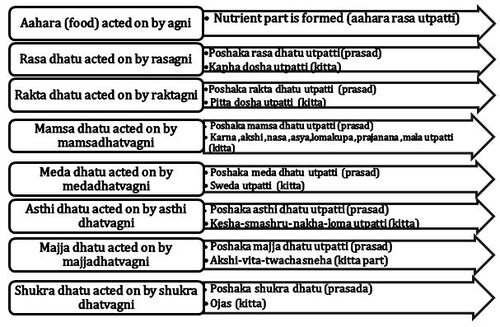 Figure 1: Action of different agnis on their respective dhatus and their products 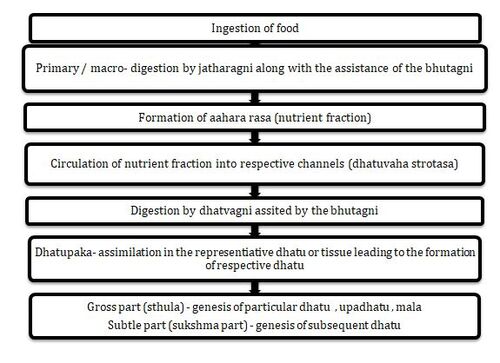 The seven dhatvagni act upon the respective dhatu by which each dhatu is metabolized into two parts i.e., essence (prasada bhaga) and by-products (mala bhaga). [Chakrapani on Cha.Sa.Chikitsa Sthana 15/15] Dhatu is metabolized by their inherent heat (ushma) or dhatvagni (transforming enzymes in the tissue elements). The nourishing fraction of dhatu (nutrient tissue elements) further nourishes the subsequent dhatu through their respective srotas (channels of circulation). For example, a poshaka rasa dhatu nourishes the rakta dhatu.[Cha.Sa.Chikitsa Sthana 8/39] In this process, the formation of essence (prasad bhaga) can be correlated with anabolic pathways. The formation of metabolic wastes or by-products (kitta-paka) can be correlated with catabolic pathways.

The cell can carry on the metabolic process with the aid of enzymes (agnipitta), which are organic catalysts. A catalyst regulates the rate of a chemical reaction's acceleration without change in itself. Few enzymes, such as the digestive enzymes (comparable with jatharaagni), function outside the cell. Most enzymes are intracellular (comparable to dhatvagni and bhutagni). Enzyme oxidation that catalyzes an oxidation-reduction process is termed as ‘oxidase’. An enzyme concerned with the digestion of protein is a protease.[5] This intracellular and extracellular metabolism can be perceived as the dhatvagnipaka.

Role of dhatvagni in pathogenesis:

Interaction of dosha-dhatu (samurchhana) is the basis of pathogenesis. The state of agni should be considered in the pathogenesis. Any derangement of dosha, if not corrected properly, progresses deeper into the dhatus and becomes more challenging to correct. Progressive pathogenesis in any dhatu should be controlled by specific measures, otherwise it affects other sequential dhatus. [Su.Sa.Sutra Sthana 21][7] So the role of dhatvagni is very important for metabolic disorders like dyslilipdemia (medoroga), obstinate urinary disease including diabetes (prameha), obesity (sthaulya). Agni and ultimately the dhatvagni are the basic concepts that are important to rule out the cause and treatment of any disease. The crucial aspects of concept of dhatvagni can be summarized as shown in Figure 1

This concept can also be depicted through the flowchart as given in Figure 2 [Dalhana on Su.Sa.Sutra Sthana 14/10][7]

Importance of concept of dhatvagni in physiology

Dhatvagni, in general, represents the process of tissue metabolism and assimilation. Different types of wholesome foods ingested in the form of eatables, drinkables, lickables and masticables stimulate digestion (antaragni). They are further digested by respective bhutagni (specific digestion per primary constituent or element). In due course of time, food gets transformed into different dhatu in the presence of dhatvagni (tissue-specific digestion and metabolism) [A.H.Sharira Sthana 3/62][6] and vata (vyanavayu) by the process of dhatvagnipaka. [A.S.Sharira Sthana 6][4] It nourishes the tissues through channels of circulation without interruption and produces plumpness, strength, complexion, health, and longevity. The tissues are sustained by getting fed by various nourishing factors (poshaka dhatu). Thus, it plays a vital role in maintaining the digestive physiology and assimilation in the body. [Cha.Sa.Sutra Sthana 28/3] Therefore, the whole genesis, metabolism, functioning and elimination of dhatu are dependent on this process of dhatvagnipaaka. [Cha.Sa.Sutra Sthana 28/3] Hence, it is the basis of the ksheeradadhinyaya (law of complete transformation of one substance to other like milk into curd) and kedarikulyanyaya (sequential transformation of tissues just like canals in a farm). This depicts the dhatu metabolism. [Chakrapani on Cha.Sa.Chikitsa Sthana 15/16] Thus, the systematic nourishment of dhatu (dhatusnehaparampara) is maintained through dhatvagni. [Cha.Sa.Chikitsa Sthana 15/19][Arunadatta on A.H.Sharira Sthana 3/70][6]

Agni is the physiological entity responsible for the status of dosha. [Cha.Sa.Chikitsa Sthana5/136] The dhatvagni being a part of this agni component, is thus equally responsible in the maintenance of health and even in the affliction of diseases. The dhatvagni is a determinant of the production and functions of dhatu. Hence its proper functioning is of utmost importance in health. Imbalance can lead to disease manifestation. For instance, in condition like raktapitta, the excessive pitta is responsible for the overstimulation of agni and dhatvagni, leading to the depletion of quality of rakta dhatu and liquidity (dravana).[Cha.Sa.Chikitsa Sthana 4/8] Here the dhatvagni is overstimulated, leading to an imbalance in the tissue metabolism. Also, in conditions like obesity (sthoulya), the meda dhatu metabolism weakens, leading to excessive meda (fat deposition). Undernourishment of the remaining dhatu depicts the slow metabolism of meda (meda-dhatvagnimandya) in the body. [Cha.Sa.Sutra Sthana 21/5-8]

In the disease rajayakshma, depletion of dhatu is observed. Dhatvagni plays a pivotal role in the pathological process.[Cha.Sa.Chikitsa Sthana 8/39-40] The text mentions the term 'ushma' in various instances while explaining the metabolism and formation of different dhatu (rakta dhatu, mamsa dhatu, asthi dhatu). [Cha.Sa.Chikitsa Sthana 15/28-31] This concept is also applicable in the pathogenesis of pandu roga, where the nourishment of dhatu is hampered leading to laxity and heaviness of dhatu (dhatushaithilya and dhatugaurava). The quality of the rasa-raktadi dhatu is hampered to a great extent in this condition.[Cha.Sa.Chikitsa Sthana 16/4-6] The dhatugata disorders are result of dysfunctions of dhatvagni. Dhatvagni is responsible for breakdown (bhinnasanghata), oxidation (dahana) leading to heat or energy generation (tapana).

Dhatvagni can be considered as an intermediate metabolism in contemporary light.[18] It is the conglomeration of sum of all intracellular chemical processes by which the nutritive material is converted into cellular matter.[19] Cellular energy is generated from aerobic oxidation of metabolic fuels (carbohydrates, fats, proteins) derived from the digestion of a meal or the breakdown of internal stores. These can also be compared with enzymes, the biocatalysts that speed up the biochemical reactions in living organisms.[20] The enzymes have varied actions depending upon the site of action and predicted function, also termed as the specificity of the enzyme.[21] Hence, the different types of enzymes have specific types of action based on the substrate diet taken. For instance, there are various enzymes like splitting enzymes (hydrolases), transferring enzymes (oxidases, reductases), and isomerases involved in the process of digestion.[22] These can be compared with the functions of pitta dosha like breaking down particles (sanghatabheda), transformation (parinama), catalyst (pravritti) etc.[23] Dhatvagnipaaka can also be compared with the concepts of pilupaakavaada and pitharapaakavadaas put forth by the Nyaya-Vaisheshika philosophy. The pilupaka confers to the chemical transformation, while pitharapaka to the physical transformation.[24] The processes of metabolism, catabolism and anabolism are also closely related to the dhatvagnipaaka. The metabolism is a series of all the reactions that happen at the cellular level. Catabolism is the breakdown or the degradation of complex macromolecules, while anabolism synthesizes the macromolecules and tissues.[25] More research on the relation between dhatvagni and specific digestive processes can provide new insights into understanding the physiology and management of diseases.

Back to the Top
Retrieved from "https://www.carakasamhitaonline.com/mediawiki-1.32.1/index.php?title=Dhatvagni&oldid=41758"