The word panchamahabhuta is made up of three words: ‘pancha’, ‘maha’ and ‘bhuta’. ‘Pancha’ means five, ‘maha’ means great and ‘bhuta’ means that which exists. All the living and non-living objects in the universe are made up of panchamahabhuta.[Cha.Sa.Sutra Sthana 26/10].Therefore, panchamahabhuta are the five fundamental elements responsible for creation of the universe, including humans. Each individual has a unique panchabhautik constitution. This constitution remains in state of equilibrium in health and any imbalance results in disease. It is crucial for healthcare provider to identify panchabhautik imbalance and should have the capability to restore equilibrium.

The word ‘bhuta’ is derived from “Bhu” dhatu(Sanskrit root) and “Kta”pratyaya(suffix). It means existence in the universe.[1] That which can be perceived through the external sense organs is called Bhuta.[2]

Each of these elements possesses inherent physical properties. 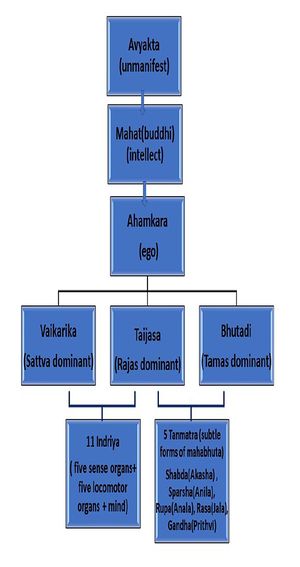 The mahabhuta are evolved from dominance of these specific fundamental constituents of universe as below.

Relation with human being

The purusha holistic human being is formed by unification of panchamahabhuta and consciousness (chetana). [Cha.Sa.Sharira Sthana 1/16]

Each mahabhuta has dominant inherent functions related to the sense organs. The mahabhuta can perceive enhanced other senses due to addition of subtle elements of other mahabhuta as given below. [Cha.Sa.Sharira Sthana 1/26-28]

The mahabhuta provide abode for corresponding sense organs to perform their sensory functions.[Cha.Sa.Sutra Sthana.8/14]. These sense organs are tools to know panchabhautik matter in the universe. [3]

Each mahabhuta can be assessed by following characteristic feature

Above mentioned criteria are applied to assess fundamental composition of any element. The signs of increase or decrease of these features in body is observed and applied in diagnosis and therapeutics. For example, if the roughness is increased, then increase in prithvi mahabhuta is known.

Influence of panchamahabhuta in embryogenesis

Role of bhutagni in digestion and metabolism

In the process of digestion and metabolism, the food passes through three levels of action of agni. At first it is acted upon by jatharagni for gross digestion. Then it is acted upon by bhutagni. At this level the agni component of each mahabhuta carries out selective digestion process of their respective component of food. The parthiva agni digests and metabolizes the prithvi component of ingested food. Further the body constituents are formed by selective process of dhatvagni. [Cha.Sa.Chikitsa Sthana 15/12-14] Body is formed of panchamahabhuta and so is food. When food is ingested, the relevant mahabhuta and body component is increased [Su.Sa.Su.46/526].

Doshas are constituted by specific mahabhuta [AS.Su.20/2] as below:

Based on this composition, mahabhuta play vital role in determining basic constitution (prakriti) of human being. [Cha.Sa.Vimana Sthana 8/95] This principle is applied in therapeutics. In case of decrease in vata dosha in body, the regimen which increases vayu and akasha mahabhuta is prescribed. Accordingly the regimens which increase corresponding dosha are prescribed.

Classification of marma (vital points) based on panchamahabhuta predominance

The marma or vital points/organs in body are classified in five categories on the basis of their harmful effect on body. The harmful effect depends upon their fundamental composition of mahabhuta [Su.Sa.Sha. 6/16] as below.

Taste (rasa) and its panchamahabhuta predominance

Application of panchamahabhuta in therapeutics

Apart from the therapeutic uses mentioned above, the medicines having dominance of specific mahabhuta are administered in therapeutic procedures. This corresponds to relevant properties and effect of mahabhuta [Su.Sa.Su.41/6-9].

Application of panchamahabhuta in diagnostic views

The characteristics of panchamahabhuta are applied in diagnosis as below:

The abnormalities in physiological functions are observed to assess proportion of mahabhuta.

Application of panchmahabhuta in disease management

For example, in Jwara, undigested food (ama) leads to vitiation of nutrient fluids (rasa dhatu). The digestion and metabolism are slowed down. Thus, prithvi and jala mahabhuta are increased and cause the disease state. The treatment of jwara includes langhana, swedana, pachana and medicines with bitter taste (tikta). The treatment has agni, vayu and akasha dominancy. The herbs like Cyperus rotundus(musta), Zingiber officinale(shunthi) having dominancy of the same mahabhuta are administered in the management. This can be applied in various other diseases too.[4] Thus panchamahabhuta theory is important in the diagnosis and treatment of diseases.

The current understanding of panchamahabhuta can be categorized under two parts:

Modern physicist, Dr.John Hagelin pointed out that quantum physics derives everything in creation from basic ‘force’ and matter fields. These fields belong to one of five fundamental spin types-most basic concept in particle physics. He correlated the panchamahabhuta with five spin types of modern physics. Extending further, the corroboration of possibility of relation of dosha with corresponding superfield is as shown in table below:

This analogy is helpful in current understanding of health. The mahabhutas are further present in body constituents like akasha (space in body, channels); vayu (air in the body gaseous exchange, Oxygen, carbon di oxide etc., breathing); agni (chemical reactions, enzymatic activity, digestion);jala(water, fluids, ionic constituents); and prithvi(earth, solid structures).[5] Body constituents like dosha, dhatu, mala, agni etc. are nothing but biological derivatives of panchamahabhuta and nothing is different than that.[6] Therefore the panchamahabhuta are highly important causal factors that influence biological processes.

Role of panchamahabhuta in creation of universe

In addition to the correlation with five spins in quantum mechanics as mentioned above, the panchamahabhuta are important links in creation of universe. As per the science, the universe is evolved from unmanifest(avyakta) through cosmic intelligence (mahat) and ego(ahamkara). Then the panchatanmatra (subtle forms of panchamahabhuta) are evolved from rajas dominant taijas and tamas dominant bhutadi ahamkara. The panchatanmatras are important links for knowledge that allows scientists a more detailed and quantifiable understanding of how consciousness gives rise to matter.[7] In this regard, the transformation process in the universe becomes a flow of energy.

The list of references for Panchamahabhuta in Charak Samhita can be seen here References_for_panchamahabhuta.pdf

Back to the Top
Retrieved from "https://www.carakasamhitaonline.com/index.php?title=Pancha_mahabhuta&oldid=41961"
Category: