The psychological constitution of an individual is known as ‘manasika prakriti’. In terms of thoughts, motivation, response, intellect, logic, and emotion, it is the sum total of features and patterns that influence the personal and social conduct of the individual. In Ayurveda, the role of mental constitution in the treatment of ailments is widely recognized. Ayurveda explains mental dosha, psychological constitutions and classification of mental disorders distinctly. This is helpful in determining predisposition and vulnerability to stressors and their consequences. This drives the person to think, feel, and act in certain ways; and makes each person unique. 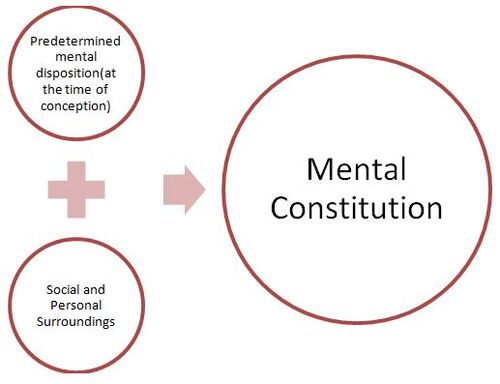 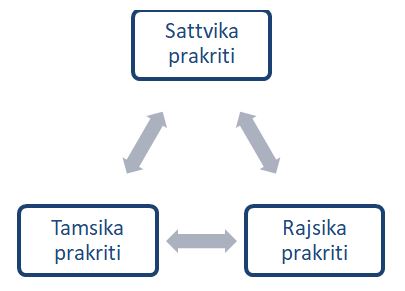 The qualities (guna) are constantly influenced by above mentioned factors. Thus, the psychological constitution may change relatively to the influence of surrounding factors and experiences. It may shift from tamas dominance to rajas dominance or sattva dominance and vice versa. There is always a predominance of activity of one attribute over another. This dominance influences and determines the individual's personality. A person's mind appears different in different situations owing to differences in perception and connections with purity (sattva), passion (rajas), and ignorance (tamas)(Code: SAT-A.127-129)[3][Chakrapani on Cha.Sa.Sharira Sthana 3/13][Chakrapani on Cha.Sa.Sutra Sthana 8/5]. The mental disposition is ultimately determined by the frequency of predominance.[Cha.Sa.Sutra Sthana 8/6]

Mental personality is the result of an individual's continuous and inherent development in terms of how they adopt with the situation. A variety of mental characteristics are observed in the behavior pattern that are influenced by the social environment.

The three types are classified further into sixteen subtypes based on the development of perfection from the point of darkness. [Cha.Sa.Sharira sthana 4/37-39][Su.Sa.Sharira Sthana 4/81-97][2] Kashyapa added two more to bring the total to eighteen. [Ka.Sa.Sutra Sthana 28/8-31][4] Individuals are placed into one of these groups depending on their psychological development, which is arranged in a highly methodical sequence (order of development from tama to sattva). Individuals categorized under brahma kaya (traits of supreme God Brahma) have the highest level of mental characteristics. Individuals with vanaspatya (traits of vegetable life), which is at the bottom of the list of development phases have a lower level of mental faculties. This systemic pattern depicts the evolution process from vanasptya to brahma, demonstrating the inclination in terms of mental traits. Here, the first three prakriti classifications are further subdivided into subtypes based on variants arising from the natural interaction of the traits of each core group. Most of the subtypes have some common features with the upper one and lower one subtype which shows the possibility of inclination from one stage to another in terms of psychological development. This nomenclature is primarily based on the systematic development of psychological faculties.[5]

Characteristics features of each of the following subtypes are following [Cha.Sa.Sharira Sthana 4/37-39]:

Mental temperament can show infinite variations depending on the permutation and combination of various factors (liking, conduct, purity, enmity, memory, attachment, detachment, jealousy, valor, fear, anger, drowsiness, enthusiasm, sharpness, softness, seriousness, and instability, etc.). [Cha.Sa.Sharira Sthana 3/13] They are all present in the individual, but they cannot all manifest at the same time. As a result, the mind reveals an infinite number of prakriti variations. Thus, infinite classification is feasible but it becomes too complex to understand and comprehend. Therefore, a limited number of classifications based on preponderance have been identified (16 in numbers).

The Bhagvatagita describes inclinations of three types of personalities towards food (ahara), mental faculties, and acts of worship (yajna). It is the first ancient manuscript that showed the importance of the food and food-mind relationship which is accepted nowadays as nutrition psychiatry.[6] The distinguishing features of each prakriti type are as following [Bha. Gi. 17][7]

In another context of classification, the Bhagvatagita described two types based on actions: divine (daiva) and demon (asuri).[Bha. Gi. 16/6][7]

Acharya Kashyapa described eight types of kalyanaja sattva (sattvika), seven types of krodhaja sattva (rajasika) and three types of tamasa sattva (tamasika). Sattva in the present text is the state of the mind. Two additional subtypes are added in the list mentioned above. Prajapati sattva [Ka.Sa.Sutra sthana 28/11][4] is added in sattvika type. Yaksha sattva [Ka.Sa.Sutra Sthana 28/24][4] is added in rajasika type. The characteristics features of prajapati and yaksa are as following:

In Bhela Samhita, the division of manasika prakriti differs from the generalized approach of Ayurvedic classification. Bhela divided kaya (prakriti) into two categories: human (manushi) and divine (divya).[Bh.Sa.Sharira Sthana 5/15][8] Each of them is further subdivided into seven different types. The divya kaya classification is based on mental faculties (brahma, daiva, varuna, gandharva, paishacha, asura, and maharaja).The Bhela classification of divya kaya is a blend of sattvika and rajasika personality types stated in various Ayurvedic texts. For manushi kaya, Bhela highlighted seven differentiating factors. Vision (pratyatmadarshan), hearing (sharvana), touch (sparshana), taste (rasna), smell (gandha), happiness (sukha) and sorrow (dukha). There are an endless number of constitutions based on permutation and combination of all of these.

Plato proposes the concept of psyche dualism, in which the psyche is made up of a physiological component and an eternal component, the mind.[11] Emil Kraepelin (19thcentury AD) proposed that mental disease had a biological foundation based on both environmental and hereditary elements.[12] In the early twentieth century, the western world realized that there is concept of body-mind connection. 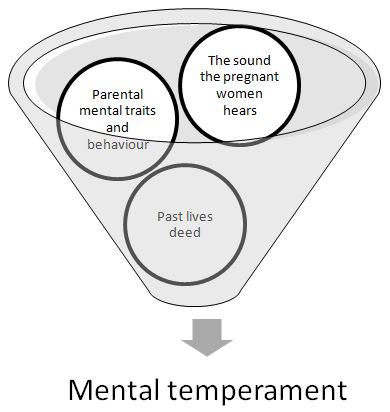 The BhagvadGita describes various aspects of psychological constitution in detail.[Bha.Gi. 17][7]All such divergent aspects are:

With all of these aspects, the characteristic of the three-way classification of prakriti differs.

These precise classifications of manasika prakriti based on sattva, raja, and tama are termed as maha prakriti. [Su. Sa. Sharira Sthana 04/99][2]They are important in diagnosis and prognosis of psychiatric and psychosomatic disorders as well as therapeutic methods for their management.

The examination of psychological constitution helps in determining mental strength. A physician may be misled by a person's physical appearance, if the mental state of the person is not taken into account. [Cha. Sa.Vimana Sthana 7/3-7] For example, the outward appearance of an underweight person does not determine his strength, because overall strength is the sum of both physical and mental strength. The mental temperament of humans should be carefully assessed to determine their endurance capacity, job capacity, emotional status, disease susceptibility, seriousness or mildness of disease and treatment options.[Cha.Sa. [[Sharira Sthana 4/40],[Su.Sa. Sharira Sthana 4/98][2], [Ka. Sa. Sutra Sthana 28/9][4]

Individuals with tamas prakriti and rajas prakriti are more prone to psychological disorders than those with sattva prakriti.

Diet has a crucial factor in maintaining the mental health. Bhagvatagita described the types of food that different manasika prakriti individuals prefer.[7] Food items are closely linked to certain psychological states. There is a specific relationship between causation of mental diseases (like unmada and apasmara) and food. In unmada chikitsa, the role of food as etiological factor is described. [Cha. Sa. Chikitsa Sthana 9/4] Ayurveda accepted that the quality of food consumed, its preparation, appearance, aroma, and freshness have a direct impact on mind. Contemporary studies have found an association between diet quality and depression, as well as support for the notion that bad nutrition is a cause of psychological problems.[6]

The physician should understand the individual's constitution before treating. The type of treatment provided to the patient is determined by the person's mental state. A person with low mental strength due to dominance of tamas or rajas prakriti is unsuitable for interventional treatments.

The psychological constitution proposes a separate new classification of individuals based only on psychological characteristics. This categorization considers an individual's attitudes, orientation, desires, inclinations, social behaviors, beliefs, manners, conduct, preferences, as well as many effective and even cognitive abilities. A mixture of all of these determines the prakriti. Validated and standardized tools for prakriti evaluation are found at the following links:

Individual interviews based on these questionnaires will serve as a powerful analytical tool for the assessment of manasika prakriti.

Standardization of psychological constitution assessment proforma: A. Arhanth Kumar et al. has developed a tool for manasika prakriti evaluation, and has eventually created a Manasika prakriti inventory based on sattva, raja, and tama qualities. This is processed and verified using the face validation technique. It is used in a pilot survey research on 100 volunteers, which demonstrated that this inventory is an effective relevant instrument for assessing an individual's psychological disposition.[16]

Sushruta Child personality inventory (SCPI): SP Suchitra et al. made an attempt to establish and standardize a self–rating scale to evaluate children's manasika prakrti for early detection of psychiatric problems. A 54-item scale is developed to evaluate the effectiveness of Yoga, food, and personality development programs in children to maintain a healthy and happy life.[15]

Intelligence status and manasika prakriti: Satyam sharma and colleagues conducted a study to determine the association between intelligence status (as measured by intelligence quotients (IQ), social quotients (SQ), and performance quotients (PQ)) and maladaptive behavior in children with milder to moderate intellectual impairment, among other goals. The research of 120 children discovered that IQ and SQ were related to one another as well as to manasik prakriti.[17]

Few studies on the idea of manasika prakriti have been undertaken, showing that this unique Ayurveda concept is yet unexplored and emphasizing the need for more research in this field.

Back to the Top
Retrieved from "https://www.carakasamhitaonline.com/index.php?title=Manas_prakriti&oldid=40534"