Jwara is an important disease. The term ‘Jwara’ implies the ability of a disease to cause anguish to body and mind. [SAT-C.7][1] This suggests suffering or illness. Based on the similarity in clinical features, Jwara is often considered as fever or pyrexia in medical terminologies. However, according to Ayurveda, the classical description of jwara includes variety of other clinical conditions with or without rise in body temperature. Therefore, fever or hyperpyrexia is considered as only one among the many features of jwara.

Jwara is the commonest clinical condition observed in medical practice either as a primary disease or as a secondary sign owing to other morbidities. Hence it is given prime importance among all diseases. [Cha.Sa. Sutra Sthana 25/40] Calor (rise in temperature), rubor (redness), dolor(pain), tumor (swelling) are the cardinal signs of inflammation. Pathogenesis of jwara includes change in body temperature, discoloration, aches. Therefore, jwara is also an indicator of inflammatory changes in body.

As per conventional medical literature, the word fever has its etymological basis in Latin, meaning simply ‘heat’, and pyrexia comes from the Greek ‘pyr’, meaning fire or fever. It is caused by pyrogenic and non-pyrogenic conditions. Micro-organisms like bacteria, viruses etc. cause infection and body temperature is raised as an immune response to fight infection. Inflammatory chemicals like prostaglandins, cytokines play key role in pathophysiology of fever.[2]

Considering conventional literature on fever and ayurvedic perspective of jwara, similarities about involvement of thermoregulatory mechanisms are observed in etiopathogenesis and clinical features. However, the treatment measures are different. The conventional measures focus on reducing body temperature and removing the origin of infection using anti-biotic medicines. Ayurveda medical literature emphasizes on strengthening the host immune response or defense mechanism, correcting the equilibrium of body components and preservation of health.

II. Based on the severity of symptoms

III. Based on site of origin

IV. Based on the site of manifestation:

V. Based on the time of manifestation

VI. Based on the prognosis 1. Curable 2. Incurable [Cha.Sa.Chikitsa Sthana 3/33]

VII. Based on frequency of episodes [Cha.Sa.Chikitsa Sthana 3/34]

Features of manasajwara (mental origin): Mental instability (vaichitya), dislike for everything (arati) and feeling of weakness in the body (glani) [Cha.Sa.Chikitsa Sthana 3/36]

Features of external manifestation (bahirvegi): Excessive rise in the body temperature and other features of internal feeling in mild form. 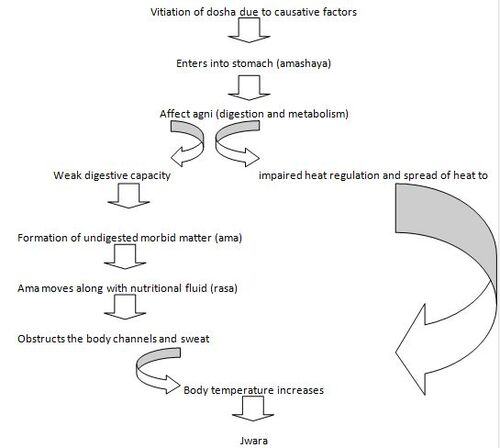 Biomarkers for diagnosis and assessment of efficacy

Clinical features are observed to diagnose the condition. Changes in body temperature are recorded.

Difficult to cure and poor prognosis

In premonitory or preclinical stage

Principles of management on observation of clinical stage

The principles of management of jwara include correcting disequilibrium of dosha and maintaining strength of the host simultaneously. Natural remission through sequential prescription of measures of fasting, fomentation, thin gruel consumption, use of medicines with bitter taste and those promoting digestion is emphasized. [A.Hr Chikitsa Sthana 1/21][4]

Hydration is maintained by advising hot water consumption. Hot water stimulates digestion, disintegrates kapha and ama, helps in the normal functioning of vata and pitta, quenches thirst and produces lightness in body. It is helpful in dominance of kapha and vata dosha. [Su.Sa.Uttara Sthana.39/106-107][3]

These measures are intended to remove obstruction in channels, improve digestion and pacification of vitiated dosha to their normal state. [A.Hr Chikitsa Sthana 1/39][4]

Suitable dietary regimen for 10 days followed by medicated ghee is advised.[A.Hr Chikitsa Sthana 1/82][4] After improvement and correction of digestion, the diet to improve strength of individual such as meat soup, yusha etc. are advised.

Fasting is contraindicated in jwara caused by aggravated vata dosha or by exertion or by traumatic or psychic causes, and in chronic conditions. [Cha.Sa.Chikitsa Sthana 3/272] [Su.Sa.Uttara Sthana.39/102][3]

Hot water is contraindicated in conditions occurring due to pitta dosha, , burning sensation of eyes and whole body; delusion and diarrhoea, poisoning and alcoholic intoxication; in summer season, in emaciation and bleeding disorders.[A.Hr.Chikitsa Sthana.1/14][4]

If the strength of the individual is normal, then the medicines are administered at a suitable stage and only if required. The general period for natural remission is one week. If jwara does not subside and deterioration in condition is observed due to acute aggravation of pitta dosha, then medicines are prescribed. [Su.Sa.Uttara Sthana.39/119][3]

Generally, panchakarma procedures are indicated when the dosha are free from affliction of ama state. [Su.Sa.Uttara Sthana.39/124-125][3]

Mechanism of action of antipyretic medicines

Inflammatory mediators released by peripheral mononuclear phagocytes and other immune cells induces fever. Fever inducing cytokines are transported from blood to brain. Prostaglandin E2 (PGE2) in the brain is believed to be the principle downstream mediator of fever. Inhibiting the production of PGE2 is a well known mechanism of antipyretics.[14]

Controlled clinical trials of these medicines are required to establish their efficacy as treatment option to established anti pyretic drugs.

The treatment objective is not only to reduce body temperature, but also to maintain equilibrium of body components and preserve health.

Jwara in initial and acute stage with recent onset (less than seven days) is nava jwara. The dosha are afflicted with ama.

Therapeutic fasting after considering the strength of patient and severity of disease. This helps to promote digestion, transform ama(undigested toxins) and regain normal states of dosha[Cha.Sa.Chikitsa Sthana 3/140] Hot water, medicated gruels and herbs having bitter taste are prescribed to promote natural process of digestion and transformation of ama state [Cha.Sa.Chikitsa Sthana 3/142]

Medicated gruels are prescribed after fasting. This dietary preparation is light to digest, promotes sweating, pacifies thirst and sustains vitality by providing nourishment. [Cha.Sa.Chikitsa Sthana 3/152] This can be continued for 6 days.

The medicated gruel is contraindicated in cases of excessive intake of alcohol, bleeding disorders especially through the upper orifices, in summer season and aggravation of pitta and kapha dosha.[Cha.Sa.Chikitsa Sthana 3/154] In such conditions, food including powdered roasted grains mixed with fruit juices, sugar or honey are prescribed for nourishment. [Cha.Sa.Chikitsa Sthana 3/155]

Precautions in diet and lifestyle

Jwara lasting for more than seven days leading to a chronic disease is jeerna jwara. The acute stage is converted into chronic after therapeutic fasting is over and the dosha are not afflicted with ama state. [A.Hr.Nidana Sthana.2/56][4] Some opine a period of more than three weeks to term the condition as jeerna jwara [M.Ni.2/65][19]

If the tolerance or immunity of body tissues (dhatu) is weak, the jwara affects them for a longer duration leading to chronic stage. [Cha.Sa.Chikitsa Sthana 3/291]

Consumption of milk is also indicated in chronic stage. Choice of using it either hot or cold or processed with appropriate herbs depends on dominance of dosha in conditions. [Cha.Sa.Chikitsa Sthana 3/239]

Therapeutic purgation (virechana): It is indicated only if the patient’s muscle mass, digestion and strength are not depleted. [Cha.Sa. Chikitsa Sthana 3/169]

Decoction enema (niruha basti): It is indicated in chronic debilitated conditions where therapeutic emesis (vamana) and purgation (virechana) are contraindicated. It promotes strength and power of digestion. [Cha.Sa.Chikitsa Sthana 3/170]

Unctuous enema (anuvasana basti): It is indicated in case of aggravation of vata dosha, depletion of kapha and pitta dosha. It is suitable for those having strong digestive power, but dry stools and difficulty in defecation. [Cha.Sa.Chikitsa Sthana 3/172-73]

The condition of jwara in which all three dosha are vitiated simultaneously is known as “sannipata jwara”. [Cha.Sa.Nidana Sthana 1/29] The proportion of dosha involved in the pathogenesis may be different or equal based on exposure to causes.

The sannipataja jwara is presented in thirteen types of clinical presentations due to variable vitiated states of dosha. The clinical features are described as below:

This condition is difficult to cure.

Sannipata jwara is incurable or difficult to cure if functions of dosha are obstructed, digestive capacity is very poor, and the condition is severe with presence of all clinical features.[A.Hr.Nidana Sthana.2/34][4]

Sannipata jwara associated with development of swelling at the parotid site (root of ear) is incurable. [Cha.Sa.Chikitsa Sthana 3/287]

The condition of jwara in which intermittent or irregular clinical features are observed with episodes is known as ‘vishama jwara’. The fundamental cause lies in the episodic or opportunistic aggravation of dosha involved in the pathogenesis.

If the initial stage of jwara is not treated well, and aggravated dosha are not evacuated properly, then the dosha reside in dormant state in the body channels. Whenever the person is exposed to etiological factors and/or to exogenous causes, the same opportunistic dosha are aggravated to cause vishama jwara. [Cha. Sa. Chikitsa Sthana 3/292] The episodes of vishama jwara are precipitated during favorable conditions of the dosha to exhibit its signs and symptoms. When the precipitating factors are absent, dosha lose their strength, and again attain dormant state at their respective site.[Cha.Sa.Chikitsa Sthana 3/70]

The episodic clinical presentation is due to the other variable factors like time, body constitution, digestive capacity etc.[Su.Sa.Uttara Sthana.39/124][3]

This is similar to a seed germinates in fertile soil only at a time when it gets proper nourishment, in proper season. Similarly, the dormant dosha cause disease only when they get favorable vitiating factors and strength of opposing factors (host defense) is depleted. [ Cha.Sa.Chikitsa Sthana 3/68-69]

It affects different body parts depending on dosha specific aggravation as below:

If vitiated dosha is situated in two or more than two sites of kapha dosha, it leads to viparyaya vishamajwara. [Su.Sa.Uttara Sthana.39/55][3]

If dosha is present in chest and stomach, it causes continuous jwara, which remits once in forenoon.

It is characterized by continuous mild jwara, dryness, edema and rigidity in body.[M.Ni.2/40][19] If vata and kapha are present in the skin, it causes rigor in the beginning and when they subside, pitta causes burning sensation and vice versa. [Su.Sa.Uttara Sthana.39/59][3]

The person experiences mild jwara associated with heaviness and heat all over body. [M.Ni.2/41][19] It is caused by aggravated kapha and pitta.

The management depends on dominance of dosha in the conditions.

If vata is predominant in tritiyaka and chaturtakajwara, it is managed by the administration of ghee, medicated unctuous and non-unctuous enema. The diet and drinks administered should be hot in potency and unctuous.

If pitta dosha is predominant, therapeutic purgation (virechana) is advised. Medicated ghee and milk can be given. The diet should be cold in character and bitter in taste.

Kapha predominant vishama jwara is managed through therapeutic emesis (vamana). Fasting, administration of hot decoction and digestive medicines are done. Diet and drinks should not be unctuous in nature. [Cha.Sa.Chikitsa Sthana.3/293-96]

The five types of vishama jwara are managed by five decoctions made from drugs described below:

Rigidity of penis, ejaculation and destruction of semen resulting in the extinction of life

Back to the Top
Retrieved from "https://www.carakasamhitaonline.com/index.php?title=Jwara&oldid=40362"