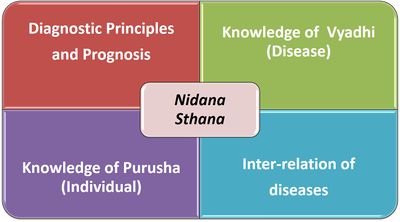 According to swabhavoparam vada, the resolution / destruction of the existing always happens naturally in the course of time. So the nature itself heals disequilibrium.[[Chikitsaprabhritiya Adhyaya#Swabhavoparama vada (theory of natural destruction)[Cha.Sa.Sutra Sthana.16/27].This aspect of host defense mechanism is important to be assessed for knowing natural healing capacity of an individual. In the fourth chapter,Prameha Nidana, the process of onset of disease through interaction between aggravating and pacifying factors is described [[Prameha Nidana#Process of Onset of Disease|[Cha.Sa. Nidana Sthana 4/4]. If the host defense factors are stronger than aggravating ones, then the disease will not occur and vice versa. Therefore, before making a diagnosis of a disease, examination of patient is important with emphasis on his prakriti (basic constitution), sara (quality of tissues) etc described in context of [[Rogabhishagjitiya Vimana#Examination of patient|ten fold examination of the patient[Cha.Sa.Vimana Sthana 8/94-131]. Every person has a unique constitution and hence the same biological investigations cannot be precise to assess his health status completely. Personalized assessment is important to diagnose normal and abnormal state of the individual.

After thorough examination of an individual, one shall evaluate the disease. The second part of diagnostic protocol provides comprehensive knowledge of disease. This includes the methods to elucidate causative factors (hetu), observe premonitory signs and symptoms (purvarupa), clinical features (rupa), pathogenesis (samprapti), and pacifying factors (upashaya). The set of these five diagnostic tools is called as 'Nidana Panchaka'. This is described and applied in clinical practice to know each disequilibrium condition.

Back to the Top
Retrieved from "https://www.carakasamhitaonline.com/index.php?title=Nidana_Sthana&oldid=41253"