It is estimated that approximately 70-80% of present-day population indulges in harmful lifestyle factors like alcohol, smoking, unhealthy diet, physical inactivity etc. Among these factors, the most hazardous factor is mental stress with a higher impact on health as compared to others. These result in the development of chronic and non-communicable diseases like heart diseases, stroke, diabetes, obesity, metabolic syndrome, chronic obstructive pulmonary disease, malignancy etc. According to United Nations, by 2030, the proportion of total global deaths due to chronic diseases is expected to increase by 70 percent and the global burden of disease to 56 percent. If these diseases can be managed just by modifying lifestyle and following Panchakarma, it will create a huge impact on the society. Proper life style, good diet and Panchakarma can change the scenario leading to healthy world with minimum global burden of diseases.

Holistic approach encompasses all elements required for healthy living. Holistic approach doesn’t essentially mean following herbal and traditional systems of medicine. The ‘individual’ undergoing the therapy is more important and most suitable ‘therapy’ to a person’s health should be provided. The integrative approach should be adopted and implemented with such individualistic focus. The health promotion, specific protection by restoration and rehabilitation through panchakarma and healthy lifestyle is need of the hour.

Blueprint for preservation of health

Following the seasonal and daily regimes as mentioned in Ayurveda is the blueprint of health preservation.

During the ongoing COVID-19 crisis, nasal instillation of oil (nasya) and oil pulling (gandusha) showed a greater role in protection of health. When the nasal pathway is smeared with oil, there forms an oil coating in nasal mucosa which traps the foreign body including bacteria and viruses and thus prevents its entry into vital structures. Oil pulling therapy also works in the same way. Oil application in nostrils can be done for fifteen times in a day. [A. Hr. Sutra Sthana 20/28-29][1]

Chewing betel leaves (tambula) especially after food intake shows many health benefits. Betel leaf also has anti-cancerous effect. One who follows the daily and seasonal regimens properly will have a lesser chance of getting disease.

If the person undergoes seasonal purification procedures like therapeutic emesis etc., the therapy breaks the chain of pathogenesis of disease. This cleanses the body by expelling out increased dosha and brings back normalcy of tissues.

Panchakarma is a unique treatment modality of Ayurveda with five major therapeutic procedures for internal purification of body with allied procedures. Purification procedures of panchakarma allow the biological system to return to homeostasis and rejuvenate rapidly.

Panchakarma procedures are highly effective natural bio cleansing procedures. It can lead to a paradigm shift of health care from curative to preventive and promotive therapies.

In a study, it is reported that vamana increases glucocorticoid, ACTH and catecholamine. Vamana increases heart rate and results in vasodilatation. It prevents auto immune and inflammatory conditions. Anti-streptolysin (ASLO) titer is reported to be reduced by vamana. This suggests vamana is a definite answer for auto-immune disorders.[3]

In another study, four samples of vamana at different time intervals were collected to find the impact of lipid peroxidation. Lipid peroxidation refers to the oxidative degradation of lipids. It is the process in which free radicals steal electrons from the lipids in cell membrane, resulting in cell damage. This process proceeds by free radical chain reaction mechanism. Lipid peroxidation is the causative factor for atherosclerosis and it aggravates the initial tissue injury caused by ischemic or traumatic brain damage. Catalase is a protective enzyme which prevents the accumulation of toxic levels of hydrogen peroxide formed as a by-product of metabolic process.

The concept of microbiome is also considered here. The whole environment of intestine changes after virechana. This changes the microbiome flora too. Diet restrictions (samsarjana) after virechana, in which the person is subjected to a controlled exposure to carbohydrate diet primarily followed by protein and fat, provides a new microbiome environment in the gut.

The procedure in which medicines are administered through rectal route is termed as ‘basti’. Based on the ingredients it is of two types. Basti with decoction (niruhabasti) and with medicated oils/ghee (anuvasanabasti).

Niruha basti: It facilitates peristaltic action and enhances the absorption of nutrients from the caecum and ascending colon. Mustadi yapanabasti (a type of niruha basti) is seen to reduce the TB specific IgG and IgM significantly. This clearly denotes the immune modulation effect of basti therapy.[5]

Anuvasana basti: It influences the immune function of the body by production of T helper cells, leucocytes, cytokines and modulation of lymph mechanism.

Entric nervous system of GIT has connection with CNS. ENS works in synergy with CNS. Stimulation of ENS by chemo or mechanic receptors in turn stimulates the concerned CNS. This might be a reason behind efficacy of basti in neurological conditions like paralysis. The role of gut microbiome should also be considered here. Through basti, there might be alteration of gut microbiome which secretes enzyme that might stimulate the CNS.[6]

Genomic study on the effect of virechana and basti 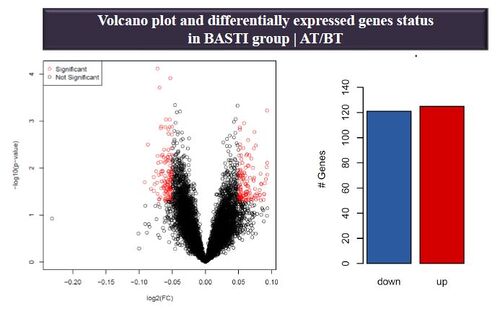 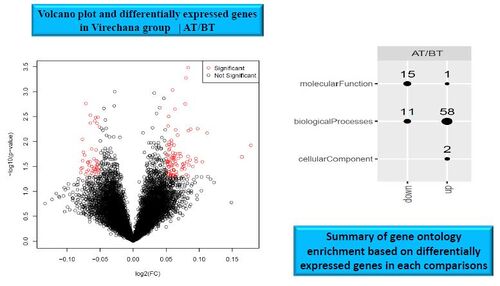 A study was conducted at I.P.G.T.R.A., Jamnagar in collaboration with Institute of genomic and integrated biology (IGIB) under CSIR, New Delhi. Total 60 patients were selected randomly for basti and virechana. Ten patients from each group were selected for gene expression analysis. Serum samples were taken before and after the respective treatments. Collected samples were sent to Ayurgenomics lab, IGIB-CSIR, New Delhi.

Procedure: Procedure carried out as per instructions in Illumine kit manual. RNA samples placed on a bead chip array placed on an iscan reader. The iscan reader uses a laser to excite the fluor of the single base extension product on the beads of the bead chip sections. Light emission from these fluors recorded in high resolution images of the bead chip sections. Data from these images were analyzed to determine SNP genotypes using Illumina’s genome studio gene expression module. The volcano plot shows that some genes (red dots) are differently expressed after basti [image 1] and virechana [image 2]. Around 120 genes were down regulated and around 125 genes were up regulated. By virechana also around 26 genes were down regulated and 61 genes were up regulated.[7]

Down regulated pathways after basti:

Effects of other panchakarma procedures

Oil massage (abhyanga): Total 10 healthy men and 10 healthy women underwent 1 hour oil massage and was studied for effects on subjective stress experience. Significant reduction in subjective stress experience was observed. It decreases cortisol levels and anxiety. It increases the blood and lymphatic flow. Other associated symptoms like pain, sleeplessness and fatigue were reduced.[8]

Foot massage (pada abhyanga): This is also mentioned under daily routine that has to be followed. It is the quickest, simplest, most pleasurable and inexpensive way to make someone healthier and happier. In a study conducted to observe the effect of foot massage on eye strain, it is observed that regular practice of foot massage is very beneficial for reducing eye strain. Marked improvement was observed in Visual analogue scale to measure severity of symptoms and Likert scale for measuring frequency of symptoms.[9]

Head massage with oil (shiroabhyanga): A study in which head massage (shiroabhyanga) done with medicated oil (mahabhringrajtaila) is effective in reducing generalized body ache (angamarda), indigestion (apakti), vertigo (bhrama), yawning (jrimbha) and heaviness of head (shirogaurava). It is also reported that duration of sleep was improved by 6-7 hours.[10]

In a study among 34 female office workers, scalp massage was applied twice a week for 10 weeks. Positive effects were observed on stress hormone, blood pressure and heart rate. Therefore, scalp massage can be used for stress control with no spatial or time limit.[11]

In another study among 30 anxiety neurosis patients, head massage with brahmi taila reports that mean gradation of anxiety reduced by 53.2 per cent which was highly significant.[12]

Pouring of medicated oil over forehead (shirodhara): Total 16 volunteers were subjected to this procedure. Mood and stress levels, electrocardiogram (ECG), electroencephalogram (EEG) and selected biochemical markers of stress were assessed. Significant improvement in mood scores and level of stress were observed. Significant decrease in respiratory rate, heart rate and reduction in diastolic blood pressure were noted. The relaxed alert state after shirodhara was co-related with an increase in alfa rhythm in EEG. It leads to a state of alert calmness similar to the relaxation response observed in meditation.[13]

Nasal instillation of oil in less quantity (pratimarsha nasya): In a study, it is reported that performing pratimarsha nasya as daily routine may be useful in controlling the progression as well as treatment of generalized anxiety disorder (GAD) if implemented in early stage. The study was conducted on 54 GAD patients. Nasya was performed daily for 3 months.[14]

Powder massage (udwartana): Powder massage is very effective in improving the texture and to open up the channels of skin. In a clinical study 10 obese persons were subjected to this therapy. Massage was done with Kola kulatthadi churna for 7 days. Significant reduction in body weight (mean weight reduced from 84.7 to 81.8) was reported.[15]

Panchakarma, as a therapy, has proved to be effective in treating many pathological conditions. Performing panchakarma as a daily routine will help in prevention of diseases and preservation of health. Primordial primary prevention, curation and promotive aspects should be given emphasis through panchakarma. It should focus on comprehensive and inclusive health care of the community. An evidence based approach in Ayurveda through panchakarma will lead to global revolution in public health care.

Back to the Top
Retrieved from "https://www.carakasamhitaonline.com/index.php?title=Panchakarma_in_modern_lifestyle&oldid=41363"