Updates on management of cardiac diseases through Ayurveda

(This article is based on lecture delivered by Dr. Rohit Sane in Prof.M.S.Baghel Memorial Lecture Series on June 09, 2021.)

The major chronic diseases prevailing in India are cardiovascular disorders (CVD), diabetes, hypertension, obesity and dyslipidemia. Mortality due to cardiovascular disease is increasing substantially. In the year 1990, the mortality rate due to CVD in India was 15.2, which increased to 28.1 in 2016.[1] Despite the advancements in modern medicine, especially in treating CVD like angioplasty, bypass surgery, etc., the disease burden is increasing. Ayurveda can play a significant role in treating CVD as a lifestyle disorder and a non-communicable disorder.

The risk factors of CVD are diabetes, hypertension, and obesity. The burden of these lifestyle disorders is also high on the rise. As per the data available, 9.7% of the adult population in India has Diabetes.[2] Hypertension is present in 25% of urban and 10% of rural subjects in India. Stage I hypertension carries significant cardiovascular risk.[3] Therefore, it is essential to treat these comorbid conditions while treating CVD.

In Ayurvedic classical texts, different treatment techniques and different drugs are mentioned for the treatment of heart disorders. This must be reproved per the current knowledge. Animal trials are necessary to understand the mode of action of the drug along with re-establishing its efficacy.

Common Ayurvedic herbs used in the treatment of hypertension and their mechanism of action is shown in Table 1 below.

Some of the Ayurvedic herbs used in diabetes management and their mechanism of action are shown in Table 2.

The coronary artery disease (CAD) is caused due to atherosclerosis. The deposition of cholesterol and fatty tissue form plaque in the endothelium of coronary arteries. This causes clogging or damage to the artery and hamper blood circulation to myocardium. Ayurvedic herbs are described as hridya (beneficial for heart) in [Charak Samhita Sutra Sthana 4/10]. Some of the researched herbs used in the management of coronary artery disease (CAD) and their mechanism of action are shown in Table 3. 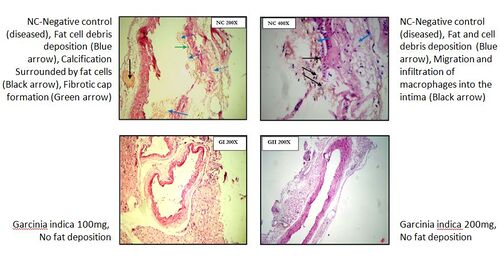 A treatment protocol named “Sampurna Hriday Shuddhikaran” (Total Purification of Heart) is developed by an amalgamation of ayurvedic and modern medical knowledge. It is an interventional health model to improve the quality of life in chronic heart failure patients.

A single session of sampurna hridaya shuddhikaran (SHS) is of 90 minutes duration. A session of SHS includes four main procedures.

Improvement in quality of life and VO2 max

VO2max is the measurement of the volume of oxygen that the body can utilize during physical exertion. In chronic heart failure, the person feels breathless after walking for a certain distance. A total of 692 chronic heart failure patients were recruited in a trial to assess the efficacy of SHS therapy. At the end of this therapy, the patients were assessed for quality of life. It is found that the quality of life improved substantially, and VO2 max was also improved.[6]

The American heart association prescribes the six-minute walk test (6MWT) for chronic heart failure (CHF) patients. Average persons can walk 350m in 6 minutes. However, patients with CHF are unable to cover that distance in 6 minutes. In a study on 200 patients of CHF, the SHS therapy with Madhavbaug Cardiac Rehabilitation Centre (MCRC) protocol on stress test showed improvement in cardiac effort tolerance of 132.1 seconds on the sixth day. The Sampurna Hridhay Shuddhikaran (SHS) model was observed very much effective in improving the exercise tolerance of Chronic Heart Failure patients. This improvement is independent of Age, Sex, and BMI of the study participants.[7]

In a randomized controlled trial, one group (Arm A) received HFRT (Heart failure reversal therapy) with conventional oral medications for heart failure. The other group (Arm B) received only conventional oral medications. VO2 max in Arm B group was 19.02ml/kg/min initially. After six weeks of conventional treatment, VO2 max increased to 21.9ml/kg/min. After 18 weeks, it again raised to 24.02 ml/kg/min. The initial VO2 max in Arm A patients was 19.65 ml/kg/min, almost equal to that of Arm B. After six weeks of therapy VO2 max raised to 28.01 ml/kg/min, and after 18 weeks of therapy, it again raised to 29.12 ml/kg/min.[9] [Image 2] This shows the significant advantage of HFRT over conventional treatment in heart failure. 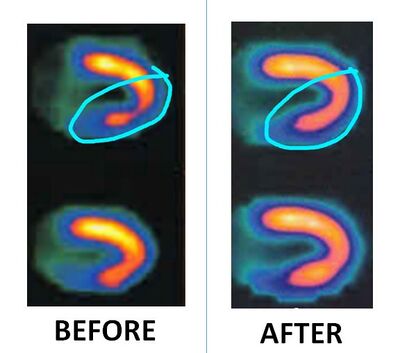 Stress Thallium test was applied to assess the reversal of ischemic changes in patients of CHF associated with myocardial ischemia. The radioactive isotope Thallium was injected into the bloodstream of cardiac patients. Gamma scanner was used to assess the circulation of thallium in the myocardium. After three months of ischemia reversal program, 30.33% of the reduction was observed in ischemia on Myocardial Perfusion through SPECT MPI.[10]

Efficacy of Heart Failure Reversal Therapy (HFRT) in reducing left ventricular distress was studied. N-terminal pro-brain natriuretic peptide (NT-proBNP) was used as a marker to assess the effect of therapy in congestive heart failure (CHF)patients. The value of NT-Pro BNP increases with an increase in the severity of CHF. The study therapy, HFRT, including SHS protocol, was administered twice daily for seven days. Post-HFRT, decoction prepared with Terminalia arjuna, Acorus calamus, and Boerrhavia diffusa was administered for the next 12 weeks of follow-up. NT-proBNP levels were measured after a follow-up period of 90 days along with some other parameters like BMI, VO2peak (evaluated by cardiac stress test with modified Bruce protocol) and weight. The findings of the investigation revealed a significant reduction in NT-pro BNP levels (42.46%, p = 0.009) at the end of the follow-up period. The study also yielded significant improvements in VO2peak (50.96%, p = 0.004). The overall results suggest that HFRT can possibly be explored as add-on therapy or a feasible alternative for the effective management of CHF.[11]

As per various published data, the survival rate of various cardiac interventions is shown below. [Image 4]

Ayurvedic treatment shows an advantageous effect in treating chronic lifestyle disorders like diabetes, hypertension, and cardiovascular disorders. Ayurvedic treatment is implemented as a first line of therapy in these disorders; then, the mortality burden can be reduced significantly.

. Q. Please share the experience in the development of collateral circulation after Ayurvedic cardiac treatment

Ans: The basic assessment for the development of collateral circulation is the stress test. For e.g.as per Bruce protocol, an increase in walking time indicates that more blood is reaching the myocardium because of the improvement in collaterals. Global longitudinal score with 2D echo with four-chamber view should be -18 and beyond. The patient with scores -10, -8 suggests the patient is ischemic. After the therapy, if the score is improving like -14, -16 etc., the collaterals are improving. But a correct identification of the cause for improvement in functions, whether it is due to collateral improvement or whether it is due to reduction in a block, is challenging to determine.

Q. Do you observe any relation between prakriti (body constitution) and its susceptibility to cardiac disorders?

Ans: Prakriti and the involvement of dosha are very much influencing the development of cardiac disorders. Typical presentations explained for different kinds of hridroga (cardiac disorders) can be seen in patients. For eg. In vataja hridroga the pain will be severe. It may be cutting, stabbing, tearing etc., in nature. In kaphaja hridrog pain will be minimal. The other symptoms like excessive salivation, heaviness in the chest etc., are more predominant. In pittaja hridroga burning in the sternum/epigastric region is the main presenting feature. The classical treatments mentioned for these individual types of cardiac disorders give an excellent result.

Back to the Top
Retrieved from "https://www.carakasamhitaonline.com/index.php?title=Cardiac_diseases&oldid=39299"