Ayurvedic practitioners are trained to identify changes in micro-tissues that predispose to disease and this phenomenon is called Kha vaigunya. These changes are not sufficient to produce the disease, however, they form the essential base for possible diseases in near future. They may be at genetic level, micro cellular level, chronic inflammation in the tissues, defects due to previous treatment, or untreated toxins in the tissues. Kha vaigunya is an important milestone in the six-stage pathogenesis of disease progression (shatkriyakala). The vitiated dosha are localized at the defective body system leading to the formation of disease. Occurrence and recurrence are two terms used in medical systems to understand the basic pathogenesis of the disease. Occurrence is the first occasion when a disease manifests due to the first event of disequilibrium of tissues. Whereas recurrence is a repeated occurrence of disease due to many factors including lack of proper treatment or elimination of the disease. However, the patient is a common sufferer in both processes. The events can be viewed as a ‘defective body system’. 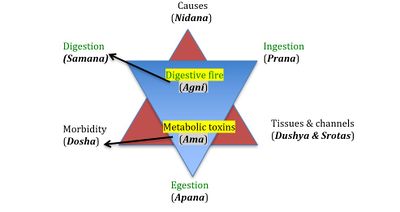