The word “Satmya” literally refers to habit, suitability, wholesomeness, agreeability to nature or natural constitution of individuals. etc.[1] Understanding the concept of “Satmya” is vital for preserving the healthy status of body. It is equally important in the management of a disease.

Habituation(Satmya) means that which suits the self. Satmya and upashaya have the same meaning. Thus,satmya is integral part of preservation of health and treatment. [Cha.Sa.Vimana sthana 1/20]

The substance which produces wholesome effect is called 'satmya' to that person. The prefix ‘Oka’ is applied to denote habituation done after spontaneous exposure.[[Cha.Sa.Vimana Sthana 8/118]

Anything that leads to comfort is satmya.[Dalhana, Su. Sa. Sutra Sthana 35/40] 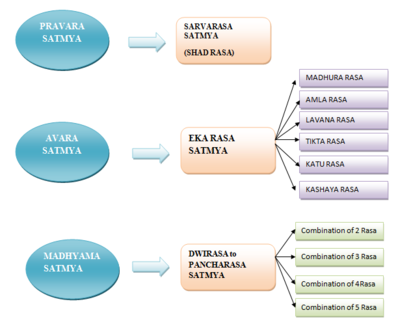 Based on one’s habitual usage of taste(rasa) taste, satmya could be categorized into three types:

1. Superior: Consumption of all rasas collectively is considered superior

2. Medium/average: Consumption of two to five rasa in combination is medium

3. Inferior: Consumption of only one rasa is considered inferior

Effort should be made to gradually move up from the inferior and the medium types of satmya to the superior type.[Cha.Sa.Vimana Sthana 1/20]

Satmya is one of the important assessment parameters in examination of patient. It differs according to geographical region(desha), season (kala),disease(vyadhi), naturalconstitution(prakriti),inherent nature(swabhava) and repeated use(abhyasa).[Chakrapani on Cha.Sa. Sutra Sthana 15/5] For understanding and application in the field of health care, the following are the components of satmya.

Desha satmya refers to suitability and adaptation in a particular geographical area. ‘Desha denotes the geographic region relating to that substance(s), suitable to the area. The food items growing in a region inherently have specific properties. For example, those growing in arid areas are light to digest and those in the marshy areas are heavy to digest. Likewise, the animals also possess qualities according to that region. [Cha.Sa.Vimana Sthana 1/22(5)]

The diet and lifestyle having opposite qualities to those of regions are considered suitable for the preservation of the health of people living in that area. [Cha.Sa. Sutra Sthana 6/50]

It is observed that people living in a particular geographical area adopt a specific diet and regimens. It may be because of the availability of substances and suitability to that particular environment in that specific area. Any unwholesome food substance to which a person is habituated should not be withdrawn abruptly.

Following are examples of desha satmya:

• People from east region(Prachya) are habituated to the use of fish.

• People living in the Sindh region (Sindhadesha) are accustomed to the intake of milk.

• region around and between the river Godavari (Ashmaka) and Ujjain (Avantika) residents are used with the consumption of oil and sour substances.

• People from the Malabar region (Malaya) are habituated to the intake of rhizomes, tuber roots(kandamula), and fruits.

Apart from this, desha satmya also means that which is suitable for a group. For example, sweet taste (madhura) is suitable to increase the group of tissues. It is also applied to denote suitability for an organ or body part. E.g. suitable for eyes(chakshushya), suitable for hairs (keshya).[Dalhana,Su.Sa.Sutra Sthana 35/40]

Ritusatmya refers to suitability according to season. A person who understands the phenomenon of seasonal adaptations in diet and lifestyle (ritusatmya) and practices it, lives healthy and long life. Seasonal regimens(Ritucharya) describes a specific diet and lifestyle for ritusatmya. [Cha.Sa. Sutra Sthana 6/3]

Vyadhi satmya refers to wholesome for or especially effective in a particular disease condition. The regimen possesses specific qualities opposite to aggravated pathological factors of disease. [Cha.Sa. Sutra Sthana 6/50] E.g. Rice gruel(Yavagu) is effective in management of fever(jwara) [Cha.Sa.Chikitsa Sthana 3/153]). The other examples are milk in gulma, honey(kshaudra) in prameha, ghee in udavarta.[Dalhana,Su.Sa.Sutra Sthana 35/40]

Jatisatmya refers to the suitability of a substance to a specific animal species. E.g. Red rice(Shali) is suitable for human beings, grass is suitable for deer.[Dalhana, Su. Sa. Sutra Sthana 35/40]

Vayasatmya refers to suitability according to age. The therapeutic measures like cauterization(agni karma), application of alkali(kshara karma), strong emesis, purgation, pungent medicines are not suitable in old age and childhood. [3]

It refers to habituation developed by practice/spontaneous exposure. This is very the most important concept of satmya having a wide range of therapeutic utility. It is an acquired type of satmya due to repeated or habitual use of a particular substance or following a particular regimen for a long time. By repeated use or spontaneous exposure in small quantities, the person gets adapted to a substance/ regimen. It may or may not be beneficial for health in general. But, for that particular person, it becomes suitable without causing any harmful effect. [Dalhana, Su. Sa. Sutra Sthana 35/40]

The dosha viz. vayu, pitta and kapha never destroy each other in spite of having contradictory properties, they coexist in a harmonious state. This happens because of their natural wholesome disposition of coexistence(sahaja-satmya), as even fatal poison does not affect snakes. [Cha.sa. Chikitsa Sthana 26/293]

Role of satmya in life-cycle 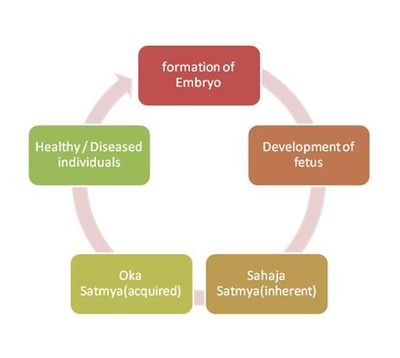 The role of satmya in an individual begins right from the formation of the embryo and continues throughout life. Adaptations during the intrauterine period are influenced by the diet and lifestyle of the mother. Adaptations after birth are influenced by the geographical area, seasons, and habitual use of substances and regimens/practices. These determine the healthy and diseased state of an individual. One should follow the rules of satmya to preserve and maintain his health. And if one gets diseased the physician should consider satmya as an important contributing factor. Satmya influences the ability of a couple to procreate a healthy progeny and its effect reflects in the next generation also.

Importance of knowledge of satmya

• Satmya is an important assessment parameter in the examination of patients from the perspective of the field of action (karyadesha).[Cha.Sa.Vimana Sthana 2/13]

• Upashaya(alleviation of disease by treatment) is inferred by satmya. Likewise,satmya is also used as a tool to reveal diseases with unclear pathologies. For example, if the pain gets relieved by the application of oil massage, then oil is suitable for the person and the condition is caused due to aggravated vata dosha.[Cha.Sa.Vimana Sthana 4/8]

• Satmya is an important component of the examination of patient. [Cha.Sa.Vimana Sthana 8/94]

• Satmya is considered while planning the post-therapy regimen after panchakarma along with other factors like variations in dosha, medicinal drugs, place of residence, time, strength, body, diet, suitability, mind, constitution, and age. These should be factored in while administering this therapy [Cha.Sa. Sutra Sthana 15/17]

• All therapeutic interventions depend upon knowledge of these factors.[Cha.Sa.Vimana Sthana 1/3, 2/13] [Cha.sa. Chikitsa Sthana 28/249]

• The measures such as oleation, corrective and unctuous enema (asthapana and anuvasana types of basti), and appropriate internal administration of unctuous substances following specific procedure also depend upon assessment of these factors. [Cha.Sa.Vimana Sthana 2/13]

• success of a therapy depends upon the administration of satmya therapies.[Cha.Sa.Vimana Sthana 8/130]

• Medicines must be administered along with the food which is satmya (wholesome) to the patient. Medicines given with satmya food are quickly effective and do not create many untoward effects.[Cha.sa. Chikitsa Sthana 30/319-20]

• The physician treating the patients simply with recipes, without consideration of desha, kala etc., may commit mistakes.

• The rejuvenation therapies(rasayana ) should be administered after appropriate consideration of age, constitution, and suitability.[Cha.sa. ChikitsaSthana 1/1/25-28]

Satmya diet in management of diseases

• Satmya is one of the six factors along with maternal, paternal, psychological, spiritual, and nutritional, which contribute to the origin and development of an organism. [Cha.Sa. Sharira Sthana 3/14].

• During the process of embryogenesis, satmya leads to the state of freedom from diseases(arogya), freedom from laziness (analasya), freedom from greed (alolupatva), clarity of senses, excellence of voice, fertility and optimum libido. [Cha.Sa.ShariraSthana 3/11].

Suitable diet and lifestyle are of utmost importance for all humans, especially for expectant mothers to have healthy children. Not following the regimen can result in a child prone to disease and congenital disorders.

• Following a suitable regimen is considered the best for the development of purusha in the group of best wholesome practices(agryasamgraha) [Cha.Sa.Sutra Sthana 25/40]

• The strength or immunity of a person depends upon the excellence of adaptability to various factors responsible for the maintenance of the body. (satmya)[Cha.Sa.Sharira Sthana 6/13]

Satmyaviruddha (antagonism of suitability) and its management

If an individual consumes a diet that he is not accustomed to, then it leads to incompatibility and causes disease. For example, consumption of sweet and cold substances by a person accustomed to pungent and hot is antagonism in terms of suitability. [Cha.Sa. Sutra Sthana26/91]

The diseases caused due to this can be managed by therapeutic purgation, emesis, pacification, or prior use of wholesome substance and rejuvenation therapy. The adverse effects can be neutralized by slow and spontaneous exposure of antagonistic substances in small quantities, enhancing digestive power, young age, unction therapy, physical exercise and enhancing strength. [Cha.Sa. Sutra Sthana26/106]

A substance which is not conducive to the body is regarded as asatmya or unwholesome and which becomes responsible to provoke all the doshas. [Cha.Sa. Sharira Sthana 1/127]

Contact of sense and motor organs with unsuitable objects (Asatmyaindriyarthasamyoga) is one of the three fundamental causes of disease. Adopting unwholesome regimen (Asatmyasevana) especially in terms of diet is a causative factor for a number of diseases as below.

Role of asatmya in disease

Unsuitable diet is listed among causative factors of following diseases:

It is important to know the unsuitable factors causing disease.

The concept of satmya is applied in view of the development of personalized medicine. Ayurnutrigenomics approaches personalized nutrition and therapeutics based upon a person’s genetic mark-up and nutritional suitability. This includes various aspects of satmya like prakriti satmya, deshasatmya, jatisatmya, ritusatmya as described above. [4]

The concept of satmya has a huge scope of research in view of genetic suitability, adaptations and its utility in treatment. It is also applied to understand allergy and its etiopathogenesis.

In Charak Samhita, the term satmya appears 83 times in original verses and 64 times in commentary by Chakrapani. The contextual meanings and application & categorization of the term with references are listed here.