The Sanskrit word ‘kala’ (also spelled as ‘kaala’ or kAla) means time. It is accepted as one among the nine fundamental elements (karanadravya) in Ayurveda [Cha.Sa.Sutra Sthana 1/48] and Vaisheshika philosophy.[1] Like an entity, kala also possesses qualities (guna) and effects (karma). [Cha.Sa.Sutra Sthana 1/49] Destruction and production of beings, the past, present, and future times are effects of kala. The word ‘kala’ is often used for time in general, period or proper time when something occurs. However, it has a broader and deeper interpretation as narrated in Ayurveda from a medical point of view. Kala is one of the ten factors of clinical examination (dashvidhaparikshya bhava). The vitiation and pacification of tridosha, dhatu, manifestation of diseases, and even management of conditions, daily and seasonal routines, etc. are influenced by kala. The strength and luster of that person are enhanced who knows suitable diet and regimen for every season and practices accordingly. [Cha.Sa.Sutra Sthana 6/3] Kala plays a key role in preventing and treating diseases in medical science in many ways. Kala is one of the bases for classifying conditions like acute and chronic diseases; and kalaja (natural or timely) and akalaja (premature or untimely) diseases. Kala has a role in drug collection, formation, preservation, and administration. Kala helps understand physiological functions as many procedures follow the circadian rhythm in the body. Thus, it is also helpful in maintaining health and understanding the etiopathology of diseases. Every drug acts by its specific pharmacokinetic, pharmacodynamic mechanisms and has definite rate of metabolism and half life. These properties elucidate the role of kala in the treatment of diseases. Difficulty in treating chronic diseases and appearance of grave prognostic signs (arishta) that are indicative of patient’s approach towards death are the factors that indicate the role of kala in prognosis of diseases.

The word ‘Kala’ is formed by ‘Kakar’ and ‘Aakar’ of Kala and ‘Lakar’ of Lee dhatu. Kala means to count (kalate) and to hold or to put on (kalayaati).[2]

Due to the destruction attribute, all the creatures (bhuta) will resume their pure absolute form. [Su.Sa. Sutra Sthana 6/3][3]

These etymological derivations convey various characteristic features of kala. The continuity of kala never breaks. It infers that kala is eternal and infinite. For all the entities in the universe, their destruction is subjected to kala. After the destruction, the bhuta resume their pure absolute form.

The birth and growth of living beings is relative to time. Kala brings the living beings closer to death. The moment of death comes closer as time progresses, so it is responsible for compilation and briefing of all living beings in one group or one form. Thus, the meaning of kala is to brief or to condense. [Su.Sa. Sutra Sthana 6/3][3] When a person dies before old age, people often talk about his assassination by kala. Hence kala, in this way, is responsible for shortening a person's age. Kala never stops even for a moment and is always dynamic, therefore called 'kala’. [Su.Sa. Sutra Sthana 6/9][3]

Kala is devoid of any action (nishkriya). Conjunction (samyoga) to one place and disjunction (vibhaga) from another place is essential for any movement.[Cha.Sa.Sutra Sthana 1/52] This phenomenon is not possible with kala, because it is present everywhere. Kala incorporates sorrow and prosperity in all living beings. [Su.Sa. Sutra Sthana 6/3][3]

Kala is the name of ‘The Almighty’, which originated from no one. It is devoid of origin, existence, and destruction. It is responsible for generating natural and deformed rasa (six tastes mentioned in Ayurveda- madhura or sweet, amla or sour, lavana or salty, katu or pungent, tikta or bitter, kashaya or astringent) in substances. This means that all substances are devoid of rasa and potency in the initial stages of development. Rasa and potency develop after a certain duration of time. These natural rasas further get deformed as time continues and substance progresses towards senescence. Kala is the process of transformation into seasons and is thus called ‘parinama’. [Cha.Sa.Vimana Sthana 8/48], [Cha.Sa.Sutra Sthana 11/42]

Kala portrays a year (samawatsara) and the state of disease of a patient.[Cha.Sa.Vimana Sthana 8/125]

Kala is responsible for the generation of people and diseases. The universe is dependent on kala and kala is accountable for implementing all actions. [Cha.Sa.Sutra Sthana 25/25] Infact, the universe is generated from kala. Thus kala is the producer of all those substances which are produced. It is a shelter for the world.[1] Kala is responsible for determining small or younger (apara), bigger or older (para), neither younger, nor older; simultaneous (yugapat), late (chira) and early (kshipra).[1] These divisions must be understood from the perspective of rotations of earth around the sun. For example, if Ajay is older in age than Vijay, then this indicates that Ajay has witnessed more rotations of earth around the sun as compared to Vijay, hence Ajay has spent more kala on earth than Vijay and therefore Ajay is older (para) and Vijay is younger (apara). Kala is nectar (amurta), which means it is not corporeal. Corporeality is the quality of having definite dimensions.[4] Since kala cannot be bound in definite limits/shapes, it is incorporeal. All the entities which are produced (karya dravyas) are corporeal in nature. All the substances which cannot be created but are responsible for the production of entities are called ‘karana dravya’. Karana dravya are incorporeal and kala is one among them. Kala are considered incidental causes (nimitta karana) for every activity. [Cha.Sa.Sutra Sthana 1/48] Since kala cannot be produced, this means it doesn’t have any beginning (anadi); as kala cannot ever end, it is eternal and indefinite (ananta). [Su.Sa.Sutra Sthana 6/3][3] Being eternal, kala is non-destructible and non-divisible.

Time is one of the essential coordinates that is related to all the actions of the world because every action, either occurs early or late, and no action can surpass the involvement of kala in it. If the world becomes free from this control, it will become inactive.[5]

Classification depending on external conditions (aupadhikabheda)

Depending on external conditions, kala has two divisions:

It is eternal moving time that is concerned with the day/season/year. [Cha.Sa.Vimana Sthana 8/125] It is not only used by the medical fraternity but also by common people as a calendar.

Each of these ayana is divided into three seasons (ritu). Each ritu comprises two months (masa). Each masa has two fortnights (pakshas) – shuklapaksha and krishnapaksha, of 15 days each. This division is assumed as Lunar metrics. 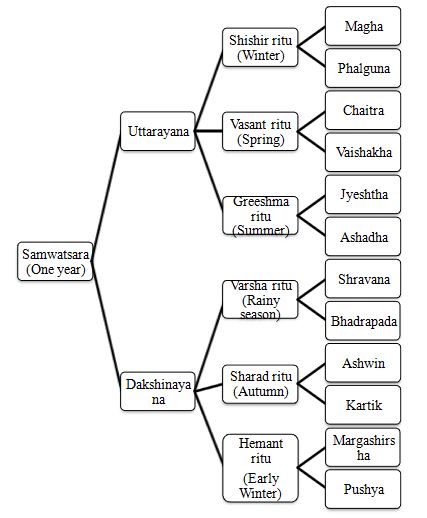 Image 1: Division of Kala in a year

The condition of a patient changes with moving time due to various stages of disease manifestation. [Cha.Sa.Vimana Sthana 8/128]. Understanding the stages of diseases is mandatory for planning its management. Thus, kala is vital in medical sciences.

Division of time in classical literature

In the ancient era, time was calculated in various units. It is divided into units like akshinimesh, truti, seconds, minutes, hours, days, years, etc. for practical utility. The smallest unit of time is akshinimesh (also called matra). Akshinimesha is the time taken in the blinking of eye lids. Further division of time is mentioned below.[A.S.Sutra Sthana 4/5][6]

Smallest unit of time according to Shrimad bhagavata is ‘Truti’. Truti is described in following way - the combination of two paramaanu forms an anu. Three anu combines to form a trasarenu. Trasarenu are the particles that are visible as particles when beam of sunlight enters the room through window. The time taken by the sunlight in crossing a ‘trasarenu’ is called Truti. Further classification of Truti is:

Role in the classification of diseases:

Some of the diseases in Ayurveda are classified based on kala. e.g.

a. Kalaja vyadhi: These are natural diseases occurring due to old age. For example, arthritis, Alzheimer’s disease, Parkinson disease are observed in old age.

b. Akalaja vyadhi: These are unnatural diseases. For example, greying of hairs at an early age.

Similarly, the death is classified as kalaja mrityu (natural death after completing the expected lifespan) and akalaja mrityu (uncertain or premature death).

Diseases are classified into seven types. One among them is kalabalapravrittavyadhi (seasonal or time-linked diseases). [Su.Sa. Sutra Sthana 25/5][3]