Diagnosis and management of kasa(cough)

The voice of patient resembles the sound that comes out of a broken bronze vessel. [Su.Sa.Uttara Sthana 52/5][1]

In a study, kaphakasa is compared with chronic bronchitis.[2]

Kasa as a result of trauma (kshataja)

Kasa due to depletion of body tissues (kshayaja) 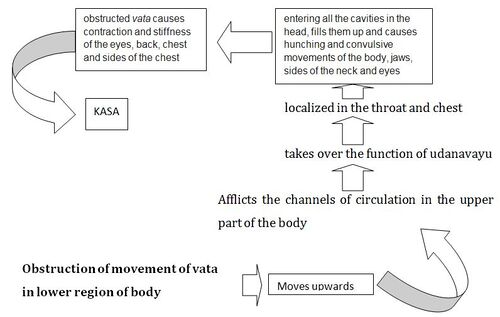 If the patient is weak, cough due to depletion of body tissues (kshayaja kasa) may cause death. All types are palliable in old patients.[Cha.Sa.Chikitsa Sthana 18/29-30]

Cough due to traumatic injury:

Cough due to depletion of body tissues or degenerative conditions:

If the amount of pitta and kapha are less, and associated with emaciation, then ghee processed with Pistacia chinensis (karkatakasringi), Sida cordifolia (bala), Sidarhombifolia (atibala) and milk should be given.

If kasa is associated with discoloration or difficulty in urination, then milk processed with Pueraria tuberose (vidari), Neolamarckia cadamba (kadamba) or with tender fruits of Flacourita jangomas (tall) should be given. [Cha.Sa.Chikitsa Sthana 18/153-54]

Meat soup along with wheat, barley, rice etc. and sweet, sour and salty foods are wholesome in kasa with vata predominance.[Cha.Sa.Chikitsa Sthana 18/76-82]

Goat’s milk is good in all types of kasa.[2]

If kasa is not appropriately treated, it leads to consumption (rajayakshma) due to aggravation of all three dosha and depletion of body tissues.[Su.Sa.Uttara Sthana 52/6][1]

The whole plant (panchanga) of Solanum xanthocarpum showed significant anti-tussive activity when compared to its roots. Administration of 10 gms of powder of drug for 10 days in 30 patients reported better action over kapha dominant kasa. The drug might be suppressing the central cough center by stimulating opioid receptors in the brain. It may be acting through protective ciliary activity in the respiratory tract. The action as demulcent can relieve cough.[6]

In a study conducted on 19 patients, Terminalia chebula (haritaki) with Rock salt (saindava lavana) was found effective in reducing the symptoms of kaphakasa. There was 92.3% relief in cough with sputum and itching in throat. The action of haritaki on vata and kaphadosha due to its hot potency is observed as reason behind efficacy.[8]

In a study, kantakari-marichaleha (ayurvedic formulation) was administered for 7 days in 30 children with symptoms of kaphakasa. It was found effective in reducing the signs and symptoms.[9]

In another study on 60 patients with kaphakasa, 10gms of Samasarkarachurna for 15 days is found effective in reducing the signs and symptoms.[10]

In another study conducted on 60 patients with pulmonary tuberculosis (TB), administration of Bhrigarajasava along with the standard treatment was found effective in reducing the cough. The cough progressively diminished and became occasional and non-productive within 15 days of treatment.[11]

In another study conducted on 25 patients of kasa, administration of vyaghri-haritaki avaleha for four weeks showed highly significant results signs and symptoms.[13]

Administration of unctuous enema (snehabasti) in pertussis patients of pediatric age group ( n=2) was studied. It was found very effective in reducing dry cough. Sesame oil in a dose of 10 - 20ml is used in basti for 14 days along with antimicrobial therapy. Initially, the intensity of cough was reduced, followed by a reduction in the frequency of cough episodes. Unctuous enema acts directly over the colon to restore normal functions of vatadosha.[14]

In 40 children with kasa, administration of Kasahara Dashemani vati for 60 days showed relief in all symptoms of kasa. Reduction in acute eosinophil count (AEC) and erythrocyte sedimentation rate (ESR) levels are noted. The decrease in IgE levels indicates the drug’s action against allergy. It is found effective in vata and pitta predominant kasa.[15]