Diagnosis and Management of Neurological Diseases in Ayurveda

This article is based on the lecture delivered by Prof. (Dr.) S.H. Acharya in Prof. M. S. Baghel Memorial Lecture Series on July 09, 2021.The video lecture can be accessed on the link of facebook page.

Vata is an essential factor for the sustenance of life and cognitive functions. [Cha. Sa. [[Sutra Sthana ] 25/40]. Vata is responsible for all activities in living beings, and its derangement can result in many diseases and even fatality. [Cha. Sa. Sutra Sthana 17/ 118] All voluntary and involuntary body movements, including natural physiological impulses (somatic & psychosomatic), are executed by neural pathways. These activities with cranial nerve impulses are outcomes of activities of vata. Respiratory functions, cardiac and circulatory activities are invariably done by vata. All somatic systems and their regulatory functions and integration are governed or maintained by vata.[ Cha. Sa. Sutra Sthana 12/ 8] It also controls and regulates the activities of the mind (manas). [Cha. Sa. Sutra Sthana 12/8] The perception, cognition, and thought process is under the control of vata. So, the vegetative nervous system, central nervous system or higher nervous system, brain-behavior, and mental functions are all governed by vata itself. The physiology of vata cannot be limited to neurophysiology. Instead, it can be extended to molecular biology in addition to the neuronal or cellular functions.

Even though vata is ubiquitous all over the body, its specific location is the large intestine (pakwashaya) by Ayurvedic classics. The skin (twak), auditory system (shrotra) and bone (asthi dhatu) are additional locations.

The terms like sira (blood vessels), snayu (tendons) and kandara (ligaments) describe the pathology of seizures (akshepaka, dandaka) and palsies (ardita, pakshaghata). Their description in vata vyadhi confirms the connection of vata dosha disorders with the nervous system.

The location of mind is described as between the top of the skull and palate by Acharya Bhela. It is precisely where the cortex and limbic system, i.e., the higher nervous system related to the functions of the mind is located.

In Ayurveda, more importance is given to functional aspects than the neuro-anatomical structures.

A number of diagnostic terminologies related to the disorders of vata can be correlated with neurological diseases.

These are some conditions related to neurovascular, neuro degenerative, myelopathic and radiculitis disorders which may affect pyramidal or extrapyramidal tract, both peripheral and central nervous system:

Diagnostic and Therapeutic approach in Ayurveda

Cerebrovascular stroke is of two types considering its etio-pathology and manifestations. The principles of treatment vary based on etiopathology. Ayurveda also considers cerebrovascular attacks in the same way.

The clinical manifestation of ‘ardita’ is described as either half of the entire body or half of the face affected by aggravated vata dosha.[Cha. Sa.Chikitsa Sthana 28/42]

So, ardita has a very similar clinical picture as that of pakshaghata (hemiplegia). However, a group of illnesses noted along with ‘ardita’ manifest in episodic form (vega). When the episodic event seizes, the patient is almost in normal state. Thus, a differential diagnosis between ardita and pakshaghata is chiefly relying on the transient nature of ardita [Chakrapani commentary, Cha. Sa. Chikitsa Sthana 28/38-42]

In ardita, nasya therapy is the first choice of therapy or the recommended line of treatment. Various studies have demonstrated the effect of nasya therapy in transient ischemic attacks and postulated its direct impact on intracerebral space.

There are three main hypotheses (as earlier proposed by the speaker) on the mode of action of nasya therapy on the brain and neurological diseases.

Nasya therapy, if performed judicially in accordance with the classical procedure can produce noticeable results in ischaemic conditions. The position of the head shall be lowered from the table. Person in a supine sleeping position with hyper extended neck and head slightly hanging downward (head low position)]

Stroke resulting from cerebrovascular hemorrhage can lead to hemiplegia or monoplegia or quadriplegia depending on the focal area. Acharya Charaka has also mentioned these different conditions as ekanga roga (monplegia), sarvanga vata(quadriplegia) and pakshavadha(hemiplegia). [Cha.Sa.Chikitsa Sthana 28/54-55]

Acharya Sushruta has mentioned the involvement of the vascular system (dhamani) of the head in the pathology of stroke - Pakshaghata. [Su. Sa. Nidana Sthana 1/60]

Virechana therapy is the first line of treatment in pakshaghata (complete stroke). This line of treatment is most effective in the initial stage, i.e., within 2-6 weeks of the attack. After this period, it becomes a chronic condition, and then the general treatment protocols of disorders of vata are recommended.

When the hemorrhage happens at the area of mostly ner internal capsules, near the circle of Willis, huge edema develops around the area in the brain which is usually referred as peri -hemorrhagic edema. Furthermore, when oedema recedes, there will be some improvements in the signs and symptoms of a stroke. So, at this stage of edema, virechana works well. It was found to contribute significantly in reducing peri-hemorrhage edema. 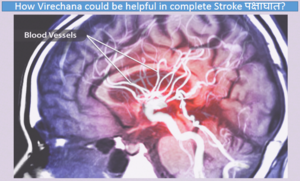 The recent research on the management of stroke reveals that due to rapid onset, the primary injury of ICH is challenging to treat. Primary injury is followed by secondary injury in the peri hemorrhagic region over several days to weeks and provides a longer treatment window than the primary injury. It is important to minimize the direct effect of clot-related hydrostatic pressure. Clot removal and/or hyperosmolar therapy by mannitol etc. is indicated for the purpose.

A collection of molecules called the ‘complement system’ plays a crucial role in the body’s frontline defense against pathogens. But after a stroke, this system can trigger harmful inflammatory processes that damage the brain. Recent investigations in mice reveal that better outcomes can be achieved by addressing the immune response. It can be done by inhibiting its harmful effects immediately after stroke or promoting its ability to aid recovery.[1] [2]

So, virechana could be a better supplement in Ayurveda clinics for steroids and diuretics to deal with cerebral inflammation. In addition, the mechanism of purification therapies(shodhana) could flush out untoward oxidant molecules generated during the phenomenon of stroke. This can set the immune mechanism to normalcy.

When it is established that there is infarction and complete death of the nerve cells in complete stroke, it is usually treated as incurable. However, several patients with hemorrhagic stroke have got complete improvement in symptoms after Ayurvedic treatment. The slow auto-healing of neighboring tissues of infarcted focal area, the concept of neuronal plasticity, sensory-motor integration in the brain etc., can be the reasons behind these recoveries.

Concept of avarana of vata in neurological diseases

“Avarana” pathologies are complex conditions having progressive nature and are difficult to diagnose and manage. Most of the progressive degenerative conditions of the brain do fall under the different kinds of Avarana.

E.g. 1: Parkinsonism can be considered as “kapha-avruta –vyana”. The main symptoms are bradykinesia (gati sanga) and tremor. [Cha.Sa. Chikitsa Sthana 28]

Two intrinsic factors are leading to vitiation of vata

b) Occlusion of its path (avarana)

In the case of parkinsonism, bradykinesia (gati sanga) is already there and the later vitiation of vyana vayu triggers the presentation of tremors. Here, avarana can act as an additional triggering factor. If the “anyonya avarana” takes place in between different forms of vata, it can manifest as other symptoms like speech disorders and demention etc.

For example, avarana of vyana with prana vayu can lead to dementia in parkinsonism.

The above are indicative of different sensory palcies including affection of proprioceptors. Oleation (snehana) is contraindicated in these disorders.Rukshana is the first important line of treatment in such conditions. After rukshana could follow the routine Vata treatment measures.

Simple methods like dietary modifications as daily use of millets like barley(yava), raw vegetables without adding salt can produce rukshana in the body.[Cha. Sa.Chikitsa Sthana 27/25-26]. Excessive rukshana will lead to aggravation of vata leading to the symptoms like loss of sleep, increased pain etc; then one can shift to the line of treatment to oleation (snehana), sudation(swedana)etc.[Cha. Sa. Chikitsa Sthana 27/40-41]

Drastic purification (shodhana) procedures are to be avoided, and the treatment should be planned according to the strength (bala)of the patient. Rejuvenating therapy (rasayana) also have a great role, especially in dealing with neurodegenerative conditions. [Cha. Sa. Chikitsa Sthana 28/239-241]

While dealing with diagnosed neurological diseases, an Ayurveda practitioner should analyze its pathology and manifestations based on Ayurvedic principles. All neurological cases cannot be invariably included under Vata vyadhi context. The diseases should be further investigated on the basis of etiopathogenesis (samprapti) under four main categories.

A. Kevala vata (vata having no association with others)

B. Samsrishta (vata having association with other components or essential elements of the body either direct or indirect –Avarana).

C. Gatattva (vata getting fused with others in other places)

D. Avritattva (vata activities / movements hampered / obstructed by others / within). The nature of Ayurvedic management can vary based upon the above pathological conditions (avastha).

1) Which is the best, effective, and safe Ayurvedic medicine for virechana in acute cerebrovascular stroke? Please share your experiences.

Sneha yukta virechana (therapeutic purgation with unctuous substance) is mainline of treatment. Medicines like eranda taila (castor oil) or castor seeds (eranda beeja) processed in milk with a small amount of cow’s urine (gomutra) for virechana in stroke patients. We can select the formulations for virechana according to the pathogenesis (samprapti) also. But, the strength (bala) of the patient should be considered with prime importance.

2) What can be a standard research protocol for the management of neurological disorders because the conditions are highly person-specific?

Ans: It is tough to answer the question because we have to develop such a protocol purely based on Ayurvedic principles. We have to re-modify the trials which had been conducted in pharmacological laboratories with modern standards. We have to re-design the clinical trials by keeping the essence of Ayurveda in it. At present, we cannot give such a single protocol. However, the development of such an Ayurvedic research protocol incorporating the necessary modern parameters also is under progress. In precise, it cannot be just clinical Drug Trial protocol but to bring the holistic concept of Ayurveda approach in research also.

Back to the Top
Retrieved from "https://www.carakasamhitaonline.com/index.php?title=Neurological_diseases&oldid=41721"