Siddhi Sthana occupies a unique place within the extensive body of Ayurvedic knowledge that is Charak Samhita. It is the cardinal part of the treatise that imparts knowledge regarding successful modes of therapeutic administration. Among the ancient Ayurvedic texts collectively called Brihattrayi (three major texts), only the Charak Samhita holds Siddhi Sthana as an integral part of the document. This last section of the Samhita has distinct characteristics in comparison to other portions with respect to its contents, arrangement of chapters and addition of much significant information which was not included before.

Siddhi Sthana deals with various practical aspects of therapeutic Panchakarma procedures and its successful administration. It is in continuation of Kalpa Sthana, where various therapeutic formulations are explained. The practical skill of a physician supersedes his theoretical/textual knowledge, especially when it comes to Ayurvedic formulations. Success in managing unpredictable clinical situations evolves from the logical understanding and modifications of therapeutic formulations. In medical practice unexpected situations are not rare. Siddhi Sthana deals with the scientific explanations of Panchakarma procedures and details the optimal response of each procedure, major pitfalls in diagnostic outcomes along with possible complications and their management strategies. 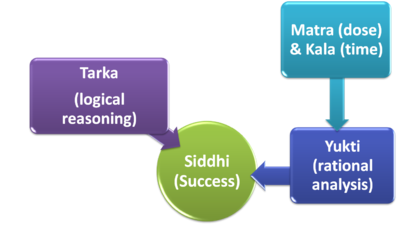 The term Siddhi literally means personified perfection or success.[1]. Success attained by chance (yadrischha) is not considered as ideal or repeatable. Further, siddhi should be justified with tarka (logical reasoning). Also,tarka is formulated depending on yukti (rational analysis). When multiple causative factors are operating in an outcome, yukti examines the genuineness of causal relationship between exposures to the causative factors and outcome. It is an intellectual exercise supported by proper reasoning and thinking. The role of multiple causative factors operating for an outcome is very genuine especially in a biological system like human body. There are various reasons behind any outcome which is either success or failure. That is why consideration of various variables like dushya (vitiated factors), desha (patient’s body and living place), bala (strength), kala (season and time of administration) etc. are very important in Ayurvedic health care system. Repeated success in therapeutic attempts assures one of siddhi. Reproducibility is the hallmark feature of scientific methods and is underscored in the concept of yukti. Charak categorically states that the concept of siddhi is established on the basis of yukti principle. Yukti itself is dependent on matra (posology) and kala (time of administration). Ascertaining the optimal dose at optimal time is the key to successful outcome in therapeutics. Hence Siddhi Sthana can be considered as the portion of Charak Samhita where the philosophical principle of yukti associates with siddhi, the pragmatic success.

Let us examine certain salient features of Siddhi Sthana. It is the first ever compiled discussion on one to one interaction between the learner and his preceptor over the standard operating procedures (SOP) of Panchakarma in Ayurveda. Among five therapeutic procedures, Siddhi Sthanahas has highlighted basti. Major share of the text has been devoted in explaining various aspects of basti, its importance, types, clinical relevance and practical aspects. The procedural details of vamana and virechana are conferred less. This may probably be because it has to be read in continuation with Kalpa Sthana where details of vamana as well as virechana formulations and their modus operandi have been given. Moreover, procedure of vamana and virechana had been previously explained in Sutra Sthana in an exclusive chapter. So the omitted details of basti, are explained with more significance. Basti has been equated to half of the whole treatment or as the whole treatment itself. The minute details of observations seen in day to day clinical practice like, reasons for basti medicine for not reaching its destination, reasons for long retention without expulsion or early expulsion etc. are mentioned along with optimal responses of basti procedures. Siddhi Sthana can be the first text to have explained minute details of basti procedure from material of nozzle, its shape and size and the logical reasons for lying in the left lateral position while administering.

The first chapter, Kalpana Siddhi gives, in brief, the overall content of all the Panchakarma procedures. It highlights the samyak lakshanas (the indicators of the optimal activity) of each procedure. It sheds light over the apt spacing between procedures and its relevance. The chapter ends with some insights into ineffective treatment due to wrong posology and timing which are worth understanding. The author has laid down the importance of judicious selection of procedures to suitable patients by devoting the second section of Siddhi Sthana. Explanations for contraindications and indications of basti have been detailed. Contraindications are described first to reinforces the importance of avoiding wrong procedures to unsuitable patients and the mode of action of each procedure is variable in different clinical situations. Additional mention about absolute contraindications to all procedures in certain patients like chanda (ferocious), sahasika (rashful), kritaghna (ungrateful), dweshta (hated by others) etc. are incorporated. This reference points to the fact that the physician had discernment upon the society of the period. The last part of the chapter also specifically mentions the concept of withdrawal criteria in clinical practice where karya (objective) becomes akarya (paused).

The subsequent chapters explain procedure of basti in Bastisutriyam Siddhi, complications of unctuous enema in Snehavyapat Siddhi, instrumental defects in Netrabastivyapat Siddhi followed by complications of emesis and purgation in Vamana Virechana Vyapat Siddhi. Here the author has defined the qualities of oushadha (drug) in general like lesser in quantity providing quick actions, easily assimilated, palatable etc. These specifications mentioned here provide an edge over conventional definition of drug in contemporary medicine. In the forthcoming chapter the complications associated with procedure of decoction enema is detailed. The methodology of explaining the complications (vyapat) highlights the clinical precision with respect to etiology, manifestations and management of complications. In the next chapter named Prasrita Yogiyam Siddhi, the author enlists a number of special basti formulations with specific actions like virility enhancers, complexion promoters, semenotropics etc. It is interesting to note that different types of diarrhea and their management strategies are also detailed in this chapter. It may be after considering the chance of manifestation of iatrogenic bowel disorders associated with improper administration of shodhana procedure. It can also be identified as an add-on note of omitted information.

The chapter on Trimarmiya Siddhi highlights the clinicians concern over major vital organs. It is believed that marma is a topic dealt by surgeons only. Contrary to that the three marmas namely basti (urinary bladder including kidneys), hridayam (heart including cardiovascular system) and shiras (head including brain) are equally important to a clinician as well. These vital organs also could be afflicted due to endogenous causes like wrong administration of Panchakarma procedures. Furthermore, the medicated enema is considered excellent for protection of marma. In this chapter many clinical conditions like convulsive disorders and urinary disorders are highlighted. The procedure of uttarabasti is also detailed here. Certain major cephalic disorders like ardhavabhedaka (hemicranias/migraine), sooryavrta (frontal sinusitis) etc. of shalakya specialty are also included in this chapter and the details of nasya as a restorative measure is also conferred. It is highly relevant to note that the formulations of basti (basti yoga) have been mentioned in different contexts. Niruha yogas (decoction/purification enema formulations) are mentioned in Bastisutriyam Siddhi, anuvasana yogas in Snehavyapat Siddhi, quantified yogas in Prasrita Yogiyam Siddhi, condition specific yogas in Basti Siddhi and yapana basti in Phalamatra Siddhi. These different, vivid and clinically vibrant formulations indicate the wide practice of basti methodically in numerous clinical conditions.

The tenth chapter of Siddhi Sthana enlists special enema recipes indicated as per dosha predominance as well as for specific clinical situations. The eleventh chapter named Phalamatra Siddhi is unique since it has detailed various fruits useful for enema and it has been presented as proceedings of a symposium participated by eminent physicians of that time. It is astonishing that discussions on enema therapy for animals are also detailed here. It also conveys the message that Ayurvedic physicians were capable enough for managing veterinary issues and successfully administered basti like procedures in animals. In the last chapter of Siddhi Sthana the author has highlighted certain excellent enema recipes which are superior in efficacy. It reinforces the wide clinical applications of basti and its customer friendly applications. Eight factors are explained as impediments to be avoided during Panchakarma procedures. A list of yapana basti with tremendous clinical efficacy which can be administered even to the outpatient population is detailed in the chapter. The Siddhi Sthana ends with a note by the author about himself and the method of compilation he has done to fulfill the science in terms of uccha shilo cchaayam(collected the subject matter from different sources like picking up the grains). These verses glorify the humility or modesty of the redactor. The list of tantrayukti described in the last portion explains the richness of literary perfection possessed by the contributor of the text.

The portion of Siddhi Sthana was not available in Charak Samhita during ninth century AD and was considered as missing. Later it was Dridhabala, the Kashmiri exponent and resident of the ancient city of Panchanadapura (modern day Panjore, in Kashmir) who did an immense literary work of completing the Samhita by compiling several important treatises of that time. He added seventeen chapters of Chikitsa Sthana, whole of Kalpa Sthana and Siddhi Sthana. Hence he is also known as the expounder of the Charak Samhita.

From a bird eye view on Siddhi Sthana it can be stated that this portion of Charak Samhita has given much importance to successful clinical practice of Panchakarma with minute details of pro and adverse effects of the same. Further it can be seen that the chapter is serving as an add-on note to many overlapped facts not mentioned at other places in Samhita. Siddhi Sthana, by explaining the procedures in the most scientific way, dealing with every aspect at the level of SOP (Standard operative procedures), drugs to be used, psychological status as well as physiological and pathological markers in the patient, serves as a part that makes Charak Samhita complete.